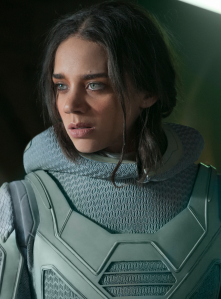 Ava Starr is one of my favourite kind of antagonists; her actions are driven by complex motives and pain and she’s not out to end the world.

In Ant-Man and the Wasp, Ava is out to get the technology that Hank Pym and Hope van Dyne have produced. Not for monetary gain or to cause harm to others, but so she can no longer be in pain. When she was a child, she got caught up in an explosion that gave the ability to become invisible, walk through solid objects and generate huge amounts of power. Those abilities came at the cost of every cell in her body being torn apart and stitched back together over and over again forever.

Her powers made her useful to SHIELD and was a thief, spy and assassin for them as they told her they’d fix her if she worked for them. They lied though and when she’s first introduced, she’s desperate to find a cure and to no longer be in pain.

I think Ava is a great antagonist. You can understand and sympathise with her motives and if the “good guys”, in this case Scott, Hope and Hank, weren’t fighting to save a loved one, you’d totally be on her side. I loved her relationship with Bill Foster as he acts like a father figure towards her. In some ways he’s her moral compass as she’s been manipulated by a shady agency from a young age, so naturally her methods might not be good or fair.

I really liked how in the mid-credits scene of Ant-Man and the Wasp, Hank, Janet, Hope and Scott are working together to get the particles they need to continue to make sure Ava is healthy and not in pain. I do like it when the antagonist can become an ally to the heroes.