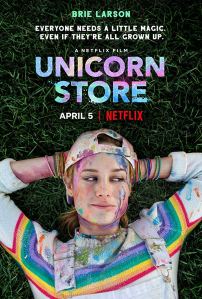 Kit (Brie Larson) is trying, and in her eyes failing, to be an adult. Her passion for art and glitter is almost snuffed out as she gets a temp job and feels her parents are constantly comparing her to more successful people her age. But then she receives a mysterious invitation to The Store, where she meets The Salesman (Samuel L. Jackson) who gives her the chance to fulfil her childhood dreams.

Brie Larson’s directorial debut is assured, colourful and magical. From the very first scene, the way characters faces are framed give you no choice but to experience with them what they’re feeling. The use of colour and glitter throughout is wonderful and Kit’s wardrobe is just the right blend of childish and mature.

Because that’s where Kit is stuck. She’s an artist with dreams of magic and colour but the “real world” doesn’t see the value in such things. She’s a twenty-something that’s now having her coming-of-age story as she goes through that dilemma a lot of young people have – should she try and be a “proper grown up” or should she still try and follow her dreams, even if they seem out there.

The script is funny and genuine and it’s due to both the script and Larson’s performance that Kit never becomes unlikeable. She’s strong-willed and sometimes selfish, but she also apologies when she has a temper-tantrum and is friendly and kind. Kit can come across very naïve, firstly because of the promises the Salesman makes are truly fantastical, but also due to her low self-esteem and the fact she’s never been in the workplace before she can’t figure out if her boss is harassing her or not. A simple yet brilliant moment was when Virgil (Mamoudou Athie), a hardware store worker who Kit pays to help her achieve her dream, states that what her boss is doing is wrong. Virgil and Kit’s friendship is so sweet, and their conflict comes from Kit being obsessed with the seemingly impossible, and not appreciating what she has in her family and friends.

Kit is a messy human who’s trying to figure out what she wants from life, and when life gets hard, she reverts to chasing the dreams of her childhood. But it’s seeing how she starts to understand who she is and what she wants that’s truly touching.

The basis of Unicorn Store’s story is weird but the themes it has, figuring out who you are, learning to love oneself and let yourself be loved, keeping the sense of wonder in the world, are universal. Unicorn Store is whimsical and heartfelt and just delightful. It’s a proper laugh-out-loud funny film but then it will also make you cry a lot too. It’s sweet and touching without ever being cringey and Larson really captures all the different sides of someone who is trying to figure themselves out and to be OK with who they are. 5/5.