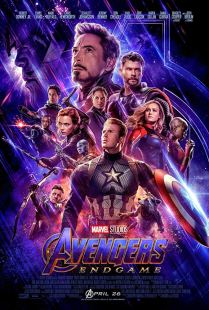 After the events of Avengers: Infinity War the universe is in chaos as half of all life has been wiped out. Those that are left behind struggle to move on and assemble once more to try and undo Thanos’ (Josh Brolin) actions and bring back those they’ve lost.

Avengers: Endgame is incredible. This film is so impressive in terms of plot, character and spectacle. There are so many surprises in Endgame. There’s twists and turns and what you could call fan service moments, but the way the film never manages to lose its way is admirable. It is three hours long, but you don’t notice that runtime at all. There are quieter moments in the film but that’s when it’s more character-focused and they are no less compelling than when these characters are trying to save the universe.

Compared to Infinity War which, while there were stakes it was also a lot more jovial film, Endgame is definitely more character focused. That’s not to say there isn’t action sequences or jokes or exciting moments, but after the events of Infinity War, the characters who survived are not who they once were. They have all experienced loss, they are all hurting, and they are all going through the various stages of grief – with some getting stuck on certain stages longer than others. The characters don’t just brush off what happened and that makes the catastrophic loss of life even more affecting.

The entire cast are amazing. The relationships these actors have made in real life, make the character relationships even more poignant and every character gets their moment in the spotlight. Hawkeye (Jeremy Renner) gets more screen time and character development compared to previous films, and Renner really gets to show not only what a great actor he is, but also what a layered character Clint Barton is. Captain America (Chris Evans) is more central to the story compared to Infinity War and Paul Rudd gets to show off his dramatic skills as Ant-Man while still never losing who that character is.

Avengers: Endgame is the finale to an eleven-year, twenty-two-movie saga. It’s the culmination of all the films that have come before it and it manages to pay homage to them while still being a satisfying conclusion – the third act really is indescribable and is unlike anything we’ve seen before in a film of this scale.

Really Avengers: Endgame does mark the end of an era. While the MCU will no doubt continue, Endgame is the finale to this story arc and what a finale it is. 5/5.

FYI I will post a probably very long spoiler-filled review of Avengers: Endgame in the next week or so. I have a lots of thoughts and feelings to get out.