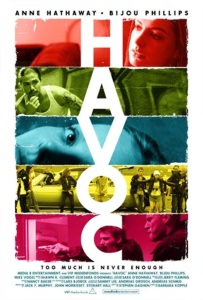 Wealthy LA teens Alison (Anne Hathaway) and Emily (Bijou Phillips), want to become a part of the “gangsta” lifestyle but they soon get in trouble when they cross paths with a real gang of Latino drug dealers.

The characters, much like the film itself, are shallow and unlikeable. All of the teenage characters are trying so hard to be something they are ill-equipped to be that it comes across incredibly cringey. The acting is not good, with Joseph Gordon-Levitt Sam being embarrassingly bad, and the dialogue is full of clichés.

There is one character in Havoc that is not irritating, though that is probably because he’s a spectator to the teenager’s violence and provocativeness and you learn little about him. Eric (Matt O’Leary) is a teenager with a camera shooting a documentary about Alison and her friends and why they want to be a part of the gang lifestyle. Those scenes do offer hints of something more interesting and layered, but they do not last long and instead go back to the superficial teenagers increasingly risky antics.

In Havoc there is a gang rape scene, though characters frame it that it wasn’t rape because the girl consented to sleeping with the men to start with which is just wrong. She may have wanted to sleep with them, but not all at the same time and she was clearly distressed once she realised what was happening. It is really insensitive and irresponsible to portray something like that, without having characters believe the girl that was raped, and to frame it that she was lying about what happened.

Havoc is full of unlikeable and irritating characters and it doesn’t have much in the way of plot or surprises either. If you’re someone like me and likes to watch things just to complete an actor’s filmography, fans of Hathaway, Channing Tatum, and Joseph Gordon-Levitt should avoid it for as long as possible. 1/5.