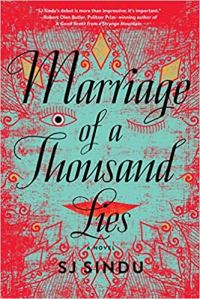 Lucky is an unemployed millennial programmer. Her husband, Krishna, is an editor for a greeting card company. Both are secretly gay, presenting their conservative Sri Lankan-American families with a heterosexual front while dating on the side. When Lucky’s grandmother falls, Lucky returns to her mother’s home in Boston and unexpectedly reconnects with her childhood friend and first lover, Nisha. When the two rekindle old romantic feelings, Lucky tries to save Nisha from entering a marriage based on a lie and finds herself pushed to breaking point.

Marriage of a Thousand Lies is an unflinching look at how someone who does not fit into their culture’s ideals can try and reconcile two sides of themselves. Lucky is in almost constant conflict with herself. She knows and accepts she’s a lesbian, she likes being a lesbian, but she doesn’t like how she has to hide that part of herself from her family. This struggle of being who she is but not wanting to lose or disappoint those who are closest to her is something that is almost constantly on Lucky’s mind as she tries to find the strength to be who she is.

Lucky’s mother wants her and Kris to have a baby and be just like all the other Sri Lankan families in their community. Lucky’s mother wants Lucky to fit in as she knows what it’s like to be shunned by the community. Lucky’s parents are divorced but naturally her father and his new wife (a close family friend) are treated just the same by everyone, it’s her mother that is seen as an outsider for being a divorcee.

Marriage of a Thousand Lies is written in the first person from Lucky’s point of view but you never really get a handle of how she’s feeling about what is happening in her life. Lucky is so emotionally closed off from a lot of what is happening around her that she barely reacts to what those closest to her are saying or doing. It makes the emotional impact of some big, potentially life-changing moments, not feel that important at all.

While they are obviously pretending to be happily married for their families, often it seemed like Lucky didn’t even like Kris and resented him for being married to her even though it was something that she agreed to and it worked for the both of them. Their relationship was never satisfactorily explored.

Nisha was equal parts frustrating and understandable. She would often have these big ideas, saying to Lucky they should run away together, but when Lucky tries to take her up on that, she reverts back to being the doting daughter. She is just as scared as Lucky about potentially losing her family and community over who she loves but she is so torn that she keeps hurting Lucky with her indecisiveness and mixed signals.

Marriage of a Thousand Lies is a well-written and poignant story. It handles the complexities of sexuality, religion and culture well but having a distant protagonist made it difficult to connect with her and the story at times. Also, in its honesty Marriage of a Thousand Lies becomes a very sad story as you, and Lucky, realise there might not be a way that everyone finishes this story happy. 3/5.