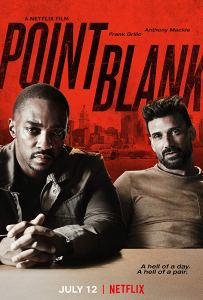 When ER nurse Paul’s (Anthony Mackie) heavily pregnant wife Taryn (Teyonah Parris) is kidnapped, he has to work with injured murder suspect Abe (Frank Grillo) to get her back as they face off against rival criminals and renegade cops.

Mackie and Grillo work well together here. Their characters are polar opposites which leads to some amusing moments, but they bring a lot of energy to their scenes together as thy have a common goal. Paul wants to get back to his wife, while Abe wants to get back to his younger brother Matteo (Christian Cooke) and all four of them are trying to keep ahead of the criminals who want them dead.

Point Blank is a predictable action thriller but the way the action is shot and how the plot speeds along makes it a fun ride. Quick edits a long with some decent fights make those scenes interesting however the car chases are more pedestrian than exciting. There are some surprisingly emotional moments though the script isn’t good enough to really pack an emotional punch.

There are some odd music cues in Point Blank as a fight or something will kick off and it’s like a needle drops onto a record but the song that starts playing isn’t one that really fits. It can be quite jarring and takes you out of the film as what you’re hearing and what you’re seeing really don’t mesh that well together. Sometimes the music choices even cheapened those times where they were going for something dramatic.

Towards the end of Point Blank, it starts to lean too far into the buddy comedy element and the ending is cheesy, but that doesn’t stop most of the film being a fast-paced and a generally compelling action film. 3/5.