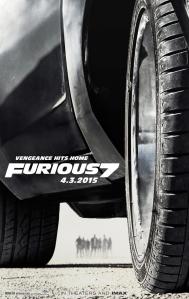 My original review of Furious 7 is here.

Deckard Shaw (Jason Statham) seeks to destroy Dominic Toretto (Vin Diesel), Brian O’Conner (Paul Walker) and their family in revenge for what happened to his brother in London. As he starts to pick them off one by one, Dom is approached by secret government agent Mr. Nobody (Kurt Russell) who wants them to rescue a kidnapped hacker and in return will help them find Shaw before he finds them.

Furious 7 takes the action and the fights up to a whole new level for this franchise. Everything that is shown in the trailer – cars flying out of airplanes, Brian running across the top of a bus that’s falling off of a cliff, a car jumping between two skyscrapers – it’s all just a taste of the over-the-top yet thrilling spectacle that this film has to offer. Everything in Furious 7 is bigger and bolder, from the international locations to the stunts, but it never loses what is at the heart of this franchise – these characters and the fact they are indeed a family.

There’s a lot happening in Furious 7 in terms of villains and plot threads. While Shaw is set up as the main antagonist to begin with, there’s also terrorist Jakande (Djimon Hounsou) who is after the kidnapped hacker and their tech for the team to contend with. Luckily, the film speeds along and it has a good balance with these villains and the different obstacles Dom and his family have to face.

That is probably the best way to describe Furious 7; it knows what it is (almost ridiculous but always entertaining) and how to make all of its parts come together cohesively. There are the fights – the one between Shaw and Hobbs (Dwayne Johnson) is brilliant – the car chases, the jokes, and the emotional character dynamics. Furious 7 never lets its foot off the gas but at the same time, you never feel like you’re missing anything.

Furious 7 is action-packed and it has a lot of emotional weight to it. It is the most perfect and respectful send of to Paul Walker and it wraps up Brian’s story so well. In lesser hands the sequence with flashbacks of Brian in the various films across the years could’ve felt cheesy. But here, it fits with the tone perfectly and it ends up being a wonderful tribute to Paul Walker and his time in this franchise. Honestly, the ending of Furious 7 leaves me speechless (and in tears) because it is handled so well. 5/5.