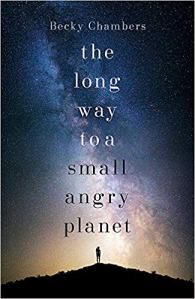 Rosemary Harper doesn’t expect much when she joins the crew of the aging Wayfarer. While the patched-up ship has seen better days, it offers her a bed, a chance to explore the far-off corners of the galaxy, and most importantly, some distance from her past. But Rosemary gets more than she bargains for with the Wayfarer. The crew is a mismatch of species and personalities, from Sissix, the friendly reptilian pilot to chatty engineers Kizzy and Jenks who keep the ship running. Life aboard the Wayfarer is chaotic but more or less peaceful – exactly what Rosemary wants. That is until the crew is offered the job of a lifetime; the chance to build a hyperspace tunnel to a distant planet. They’ll earn a fortune… if the manage to survive the long and dangerous trip. Along the way Rosemary learns she isn’t the only one on board with secrets to hide, and that space may be vast, but spaceships are very small indeed.

The Long Way to a Small Angry Planet is mostly a space road trip where not a lot of big plot things happen. Instead it’s a character driven story as Rosemary becomes a part of this crew that’s more like a family. The way exposition and character backstories are interwoven into the story is wonderful, as often it is from characters learning from one another or learning to open up and ask for help and support.

The book is told from all of the crew member’s point of view at least once, though characters like Rosemary, Sissix, Kizzy and the captain Ashby seem to get more focus. You still get a good feel of all the characters though and how they fit together. They each have their problems or secrets, some of which they don’t even know about themselves, but they still all mange to work together.

How space, and the many different species that live there, is beautiful and vivid. Humans are far from the dominant species which is a different take compared to the majority of sci-fi I’ve come across before. It’s also great to read about characters that are different species and are so different from humans – whether that’s by appearance, social norms or both. The political systems, and politics between different species, are intricate yet as the author has taken the time to sprinkle information throughout the story, when there’s tension between species, you can quickly understand why.

The world (or should that be universe) of The Long Way to a Small Angry Planet is full or rich detail as the crew stop off at different planets to restock their ship and even see friends. There’s so many different people and their technology is advanced yet not always working well, meaning the world feels lived in. This isn’t the shiny and sleek kind of sci-fi, instead it’s a dirty, lived in kind of sci-fi. The Wayfarer isn’t a new ship, things go wrong with it and it’s the crew that fixes it and makes it feel like a home.

The Long Way to a Small Angry Planet is a bit of a slow read but that doesn’t mean it’s not a compelling one. It has so much detail with its world building and it really gives the characters room to breathe. Every single member of the Wayfarer crew has their own unique personality and the author does a great job of not turning any of them into clichés.

The Long Way to a Small Angry Planet is a sweeping science-fiction novel that never forgets that humanity (though is that the right word when there’s characters who are not human?) is the most important thing. 4/5.