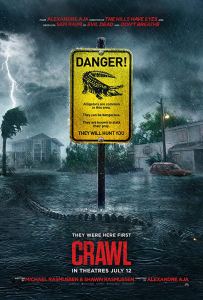 When Haley (Kaya Scodelario) goes to check on her father (Barry Pepper) during a category 5 hurricane, she finds herself trapped in a flooding house with deadly alligators.

Crawl is a combination of creature feature and disaster movie and with that it has a lot of the usual tropes, but it uses them well. There is a fair few jump scares, but they feel earnt as the film knows how to crank up the tension, leaving you almost constantly on edge. The jumps care’s release the tension just for a moment but then you realise something truly horrifying is happening and it’s hard not to look away.

One thing about Crawl that makes it feel extra tense is how something like this could happen. Not the deadly alligators going on a rampage in a hurricane, but the hurricane and the dangers it brings. Characters must rely on wide-up torches and radios as the water levels rise and the threat of flood defences failing and making everything worse is a real problem. It’s not just the alligators Haley and her dad have to survive, it’s the elements as well.

Crawl tells a simple story well – it’s runtime is under 90 minutes and the pacing is so incredibly tight that you encounter the alligators much quicker than you’d think. Scodelario and Pepper both give great performances as Hayley and her dad’s interactions feel believable as they fight to survive together. Also, the script is great as through their short conversations throughout the film you learn about their history which helps flesh out their characters without it ever feeling like a big exposition dump.

Crawl has all the makings of becoming a classic creature-feature. It’s tense, scary, claustrophobic and suitably gory and knows how to give the audience a brief reprise through humour every now and then too. The song that plays over the credits is so unexpected but also ridiculously perfect. 5/5.