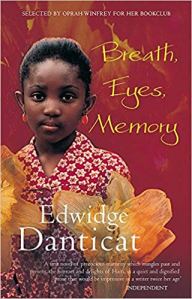 Sophie is raised by her aunt in an impoverished village in Haiti but when she is twelve years old her mother sends for her and she moves from all she knows to New York City to be with a mother she barely remembers. As Sophie grows up, she clashes with her mother over the “testing” and she tries to find her own way.

“Testing” is a Haitian tradition where a mother would test to see if their daughter is still a virgin by inserting their finger into their daughter’s vagina to check that the hymen is intact. Sophie is mentally and physically scarred by the ordeal as she would have to go through the testing every night once she was in her late teens. It naturally puts a strain on her relationship with her mother, but her mother feels it’s her duty to make sure her daughter stays pure and virtuous, plus it’s something her mother and her aunt was subjected to as well. When Sophie returns to Haiti with her own five-month year old daughter, she learns that the testing happened to her grandmother and her grandmother has no regrets over testing her children even though she knew the pain and humiliation well. The testing is a tradition and is framed as a mother’s job to do to make sure her daughter stays a virgin until she’s married.

Breath, Eyes, Memory is quite a sad book really. It tackles a lot of tough topics (please do heed the trigger warnings) though it doesn’t give all of them the time they deserve to develop. It seems almost impossible how much pain and suffering the women in one family can go through. All the women in Sophie’s family have been hurt in different ways but they are all incredibly resilient because of it. That doesn’t mean they don’t hurt each other though; Sophie and her mother clash a lot and Sophie’s grandmother can be cruel to her daughters.

I found Sophie’s forgiveness of her mother to be too quick for what Sophie had been through. I liked how Sophie struggled with what her mother had done to her, but at the same time understood that her mother tested her out of her version of love and because it’s what happened to her. Still, it didn’t seem like their reconciliation took long at all when Sophie was well in her right to continue to keep her distance from her mother, no matter the pressure her grandmother put on her to forgive her. The ending of Breath, Eyes, Memory felt rushed as another problem or tragedy was added to Sophie and her mother’s lives, taking up the time that could’ve been spent on giving their reconciliation more time to feel natural.

The audio book of Breath, Eyes, Memory is narrated well but the language used in the book is quite simple. It adds some distance from the drama and serious topics do not feel as hard-hitting as they could. Breath, Eyes, Memory is a tough read about family, shared trauma, gender and sexual identity. It’s a lot to cram into a relatively short book and somethings do get lost along the way. 3/5.