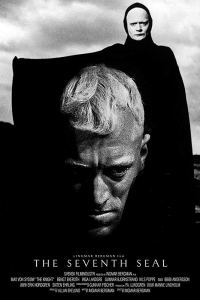 As the Knight Antonius Block (Max von Sydow) and his squire Jöns (Gunnar Björnstrand) return home from the crusades, they find their country in the grip of the Black Death. As the Knight seeks answers about life, death, and the existence of God, he plays a game of chess against Death (Bengt Ekerot) in order to prolong his time on Earth.

The Seventh Seal is a classic film that opens with the iconic imagery of a man, sat across from Death, playing chess on a beach. It’s an image that’s been replicated in media over the years, and it was the only thing I knew about this film before watching it.

The Seventh Seal is about more than a chess match though. As Antonius and Jöns travel across the country to Antonius’s home, they meet different characters along the way that join them in their journey in the hope to avoid the plague. There’s Jof (Mils Poppe) and his wife Mia (Bibi Andersson), two performers who with their young son are looking to earn money and keep safe. Jof and Mia symbolise the goodness that Antonius is looking for proof of.

The image of Death is so unsettling in The Seventh Seal not only because of the black cloak that covers Death from head to toe, but because of Ekerot’s performance. It’s so measured as he verbally spars with Antonius who tries to bargain for more time. It’s also how Death appears when you least expect it, in a shadowy corner unseen by everyone but Antonius. There becomes a sense of foreboding as you realise that moments of light-heartedness Antonius as with Jof and Mia cannot last long with the presence of Death looming over him.

There are moments of humour in The Seventh Seal, most of which comes from Jöns. He has seen a lot and is equal parts cruel and thoughtful, his wry commentary on the romantic escapades some of the people he meets goes through are funny. However, that humour does stand out when everything around Jöns is so bleak with the plague, witches being burned, and Death around the corner.

The Seventh Seal is weird and haunting. The score, scenery and imagery are unsettling, but it all comes together to be almost beautiful. I’m not sure I’ll watch The Seventh Seal again, but I’m glad I have seen it. 4/5.