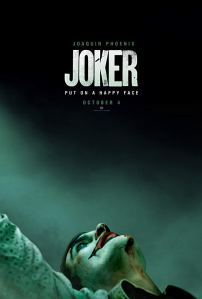 In Gotham City, wannabe comedian Arthur Fleck (Joaquin Phoenix) is disregarded and mistreated by those around him. As he embarks on a downward spiral of violence and crime, he comes face-to-face with his alter-ego – “Joker”.

There’s been much debate and “controversy” surrounding Joker long before it was released to the general public, and to be honest it wasn’t high on my list of films I wanted to watch. But when a friend from work said he wanted to see it, and I’m not someone who needs much of a push to go to the cinema, I said “Sure let’s go.”

Joker is the origin story of perhaps the most famous comic book villain. But really, it’s more of a character deconstruction than just an origin story. You see Arthur get beaten up multiple times and he’s lied to and made fun of – it’s tough to see a character being ground down so much and so often. Slowly, Arthur is pushed to the edge, and when he finally puts on the Joker makeup (which is different to the clown make up he wears for work) he becomes a whole new person.

Joaquin Phoenix gives a fantastic performance. His whole physicality changes bit by bit as he becomes closer to the persona of the Joker. The camera lingers on Phoenix’s body when he’s half-dressed, making his unhealthy skinny body on full display and an uncomfortable image. Phoenix’s “Joker” laugh is different to a lot of the iterations that have come before it. It’s unsettling as it goes on far longer than you’d expect, and it’s an uncontrollable and almost painful thing for him.

This film doesn’t have much action with the Arthur going crazy and causing chaos, instead the moments of action and violence are used sparingly which amps up the tension and makes the whole experience more uncomfortable as you’re never sure when Arthur is going to snap next.

Arthur is an interesting and flawed character and as everything in Joker is from Arthur’s point of view, pretty much all the other characters and their actions are window-dressing to the downward spiral of his life. The same can be said for the films setting. There’s brief mentions of the huge divide between the rich and the poor, and the cutting to funding for mental health and social services, that’s present in this Gotham City and how it affects Arthur and the city’s population. However, these themes are never fleshed out fully, and are instead a backdrop and a potential reason for Arthur’s issues.

Joker leaves you a lot to think about, but upon reflection, it might not say as much as it thinks it does. It’s an uncomfortable viewing experience and for the most part that is down to Joaquin Phoenix’s performance. He is great, but the film he’s a part of is perhaps not as deep as it thought it was. 3/5.