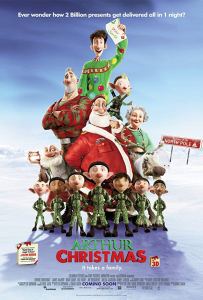 When a child is missed on Christmas Eve, Arthur (James McAvoy) the clumsy youngest son of Santa (Jim Broadbent), races against time to deliver her present with the help of elf Bryony (Ashley Jensen) and his grandfather (Bill Nighy), much to the dismay of his older brother Steve (Hugh Laurie) who runs a tight ship at Christmas and isn’t impressed with Arthur putting the whole operation at risk.

Arthur Christmas is a lot of fun and a great adventure. It pokes fun on how Christmas is so commercialised nowadays and it’s almost a military operation to get all the presents and organise everything when the shops are heaving with people. At the North Pole Santa is more of a figure head of Christmas, and instead it’s his son Steve, along with millions of elves, that run the show. The sequences of the elves dropping off presents in dozens of homes in seconds are entertaining and inventive and they contrast nicely with the picture of Santa and his helpers that we generally have. That kind of typical Christmas is what Grandsanta reminisces about, when he used a wooden sleigh and a dozen reindeer to deliver presents.

Arthur loves Christmas. He believes whole heartedly in what his father does, the magic of Christmas and that every child matters. He’s almost naïve in his enthusiastic optimism, especially next to Steve’s stoic pragmaticism, but it’s charming too as he wants everyone’s Christmas to be special.

The dialogue is hilarious, and the writing is so sharp that the family arguments feel real. While Mrs Santa (voiced by Imelda Staunton) doesn’t have as large a role, she’s a soothing presence over tense family dinners and a the most practical out of all her family members. There’s a lot of great sight gags too, many of them courtesy of the countless elves running around the place.

The animation is beautiful and impressive. From how the operations centre at the North Pole is shown off in all it’s glory with all the screens and high-tech gadgetry to then how Arthur, his family and the elves feel so warm and alive. The North Pole is all icy blues but the colourful Christmassy jumpers and clothes that Arthur and his family wears brighten up the place and makes it feel lived in.

Arthur Christmas isn’t just a funny film, it’s also one filled with heart and sentimentality without being too twee. It does such a good job at offering a new and imaginative take on how Santa could possibly deliver presents to every child around the world, while never losing the spirit of Christmas. Arthur Christmas is a proper old-fashioned family film that everyone, no matter their age or whether or not they believe in Santa, can enjoy. 5/5.