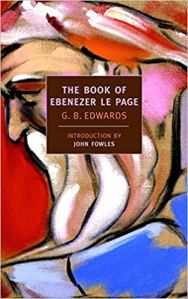 Eighty years old, Ebenezer has lived his whole life on the Channel Island of Guernsey, a stony speck of a place caught between the coasts of England and France yet a world apart from either. Ebenezer himself is fiercely independent, but as he reaches the end of his life, he is determined to tell his own story and the stories of those he has known.

First of all, I’ll say that I did really enjoy the narration by Roy Dotrice. I don’t know if they are an old man themselves or they’re just that good at voices and accents but they truly embodied the cantankerous Ebenezer Le Page. It was like listening to an old relative recount their life in the corner of the living room and as they rambled on so much and mentioned so many people it was almost easier to just nod your head and tune them out. I think I might have done that with The Book of Ebenezer Le Page as there’s not a lot that has stuck with me and I’m only writing this review the day after I finished the audiobook!

The Book of Ebenezer Le Page is a sprawling epic about one mans life. Ebenezer is writing about his past 80 years of life and all the people he’s met, loved and lost. He is one of the oldest people on Guernsey and has never left the island. He talks about so many people that it would’ve been handy to have had a family tree! So many people that he mentions are his cousins (or second or third or fourth cousins), or sometimes they are known as cousins, but they aren’t actually blood related. Then there’s his friends that he talks about too that might also be distantly related to him in some way.

Ebenezer lives through two world wars and remarkably doesn’t seem too changed by either of them. Guernsey was occupied by the Nazis during the Second World War but while how Ebenezer dealt with the occupation is featured, it’s not an overly big or dramatic event – it’s just something that he and his friends and neighbours have to deal with. Having to just “get on with things” seems to have been Ebenezer’s life moto. He’s a proud man, and a self-sufficient one, and he’s happy to work for a living rather than getting a pension in his old age.

Ebenezer really is the epitome of an old man who has seen many things and just doesn’t know how the world works anymore. It can make him equally judgmental and oblivious. For instance, he’s very quick to judge some people and can take an instant dislike to some of them. However, when he opens his home up to tourists and has a gay couple stay with him, he thinks they are very pleasant chaps and doesn’t understand why a neighbour would say horrible things about them. It’s hard to tell whether he just doesn’t think “that sort of thing” goes on, or if he genuinely doesn’t care.

It’s not the events or anecdotes in The Book of Ebenezer Le Page that have stuck with me, instead it’s the feeling this book gave me. It’s strangely nice to hear someone, even a fictional someone, tell you their life story and see how it intersects with real world events. Ebenezer has a distinct narrative voice so even though he is obviously telling you about the various events and people in his life, they are still interesting because of how he felt about them.

I wouldn’t read The Book of Ebenezer Le Page again, and I’m not sure who I would recommend it to, but it is a strangely calming and enjoyable read and an interesting way to see how and island and its people may or may not have changed over the decades. 3/5.