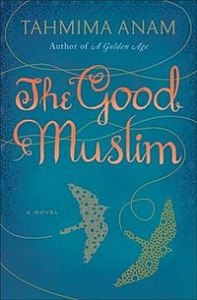 Maya Haque – outspoken, passionate, headstrong – has been estranged from her brother Sohail for almost a decade. When she returns home to Dhaka hoping for a reconciliation, she discovers he has transformed beyond recognition. Can the two, both scarred by war, come together again? And what of Sohail’s young son, Zaid, caught between worlds but desperate to belong?

I didn’t realise this until I went to Goodreads to mark this book as read, but The Good Muslim is the sequel to A Golden Age. I didn’t know The Good Muslim was a sequel and I don’t feel I really missed out on anything as it reads like a standalone novel.

The chapters alternate between different points in time, the early 1970s and the mid-1980s. The chapters in the early 1970s are during the aftermath of the Bangladesh Liberation War, as Sohail comes back from the war and he and his family attempt to get used to what peace means. The chapters in the 1980s are when Maya has returned home after being away for over seven years. She struggles to reconnect with her brother and a nephew she doesn’t know. The vast majority of The Good Muslim is from Maya’s point of view, in both the flashbacks and the present day.

A lot of the tragedy of these two siblings drifting apart comes from the fact that they are so different. They are either headstrong or reserved, and either they don’t listen to one another or are unwilling to talk about their experiences. Sohail is haunted by his actions during the war, while Maya has been dealing with the aftereffects of the war as she has worked in clinics across the country, performing abortions on women who were raped by soldiers and were shunned by their families. Both Maya and Sohail are affected by the conflict but they deal with it in different ways and it can be frustrating to see how they keep meeting at cross-purposes when they clearly did care about one another.

The rift that developed between Maya and Sohail is ultimately down to religion. After the war, Sohail becomes very religious, in fact he’s almost a zealot who appears to have his own followers and he forgets about all other responsibilities and attachments as he pursues his commitment to his faith. Maya doesn’t understand this or how much her brother could change after the war. Maya’s stubbornness is frustrating at times as she is so convinced that her idea of religion is the correct one and barely even attempts to understand her brother and his beliefs. Meeting her young nephew, she tries to help him as he doesn’t go to school and has no structure to his life. This adds to the conflict between Maya and Sohail as he has vastly different ideas of what his son should be learning and how he should be living.

The ending of The Good Muslim is what has the most impact, but unfortunately the kind of slow burn of a plot as you gradually learn more about Maya and Sohail’s experiences during the war and how that shaped them into who they are today, does take a bit too long to pull you in and make you deeply care about the two of them. 3/5.