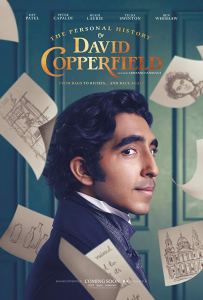 Set in the 1840s, David Copperfield (Dev Patel) attempts to navigate a chaotic world to find his place in it. From his unhappy childhood to his discovery of his gift for storytelling, he meets many eccentric people on his travels, and through them finds somewhere to belong.

Personally I’ve neither read the novel by Charles Dickens that The Personal History of David Copperfield is based on nor seen any of adaptations that have come before this one, so watching this film meant I was experiencing this classic story for the first time.

The Personal History of David Copperfield is directed and co-written by Armando Iannucci, a man best known for political satire and comedy like The Thick of It and The Death of Stalin. Having him then go make an adaptation of a classic story that’s over 150 years old was a bit of a surprise but it worked! The Personal History of David Copperfield is still very funny and it’s witty and clever like Iannucci’s previous endeavours but it’s also full of so much charm and heart that it’s just lovely.

The whole cast is brilliant, and what an ensemble it is. From Tilda Swinton as Aunt Betsey chasing donkeys, to Hugh Laurie as the good-natured but slightly odd Mr Dick, everyone is wonderful in their roles and there’s great chemistry between the all. They also wholeheartedly commit to the comedy, whether it’s a witty one-liner or clownish physical comedy, and while naturally it is a period piece their performances give this classic story a modern flair.

Dev Patel is the one who truly shines in the titular role. He has the perfect mixture of charm, bewilderment and earnestness for a lead character who is trying his best to fit in with whatever crowd he ends up in. The story of David Copperfield and the people he meets who have an impact on his life, shows the good in people; some may not be decent, but the majority will help those who need it. Having David start with nothing and strive for a better life, means he experiences all sorts of trials and tribulations, but he retains his kind heart.

The Personal History of David Copperfield flies by, so much so that some events and resolutions feel a bit glossed over, but it is still funny, wholesome and whimsical. It is truly a wonderful film and one that in the end feels like a warm hug due to the larger than life, but on the whole sincere, characters you meet along David Copperfield’s journey. 4/5.