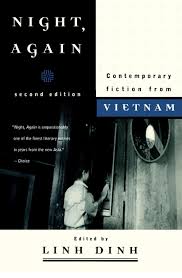 A collection of short stories by over a dozen different authors. These stories are about relationships, family, and show a side to Vietnam that’s not just the war.

Like with a lot of short story collections, I found Night, Again to be a bit of a mixed bag and unfortunately in this case I wasn’t grabbed by many of them. I thought the writing in them was generally good, and they each were like a slice of life for often very normal people. There were a few I really liked though.

One of them was “A Marker on the Side of the Boat” by Bao Ninh. This story was about a soldier who was saved by a woman, but then the pair of them are caught in a bombing. This was a fast paced and engaging story that pulls you in in such a short number of pages.

“Gunboat on the Yangtze” by Tran Vu was an unsettling one as it was about a brother and sister who have an incestuous relationship. It’s an uncomfortable read really as to begin with even though their relationship is obviously unhealthy, there’s an almost innocence to their relationship that it seems actually supportive and good for them. That strange feeling doesn’t last for long, as events quickly take an even darker turn.

A lot of the stories in Night, Again were dark or depressing. Even the ones that were lighter in tone had a sense of melancholy about them as the characters often had a bittersweet moment of realisation about their circumstances or who they were. I did get a bit of whiplash going from story to story as while a lot of them were pretty gloomy, there was the odd story like “Scenes from an Alley” by Le Minh Khue, which was a darkly funny tale.

All in all the majority of stories in Night, Again weren’t that memorable, but I’m pleased I read some stories that weren’t just focussed on a war, but often instead dealt with the everyday tragedies. 2/5.