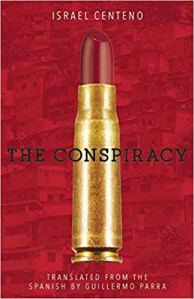 When leftist revolutionary Sergio’s sniper shot misses the President of Venezuela, he’s thrown into a sudden tailspin. As he attempts to escape the increasingly militarized regime, he winds up taking residence in a bohemian beachside commune, where he keeps a low profile until Lourdes, his former comrade, the object of his desire, and his possible betrayer, turns up one evening. Pursued by their former trainer in guerrilla warfare on the orders of the newly appointed Minister of the Interior, the two team up with unlikely partners to hatch a new plan for their survival.

Reading The Conspiracy is an experience. You follow multiple characters point of views throughout the story, giving you a wider understanding of the events unfolding after the failed assassination attempt than the majority of the characters. The sections from Sergio’s point of view are in the first person and there are often very long paragraphs and run on sentences. His mind is frantic and that comes across in the words on the page. There are times when he doesn’t believe what he’s seeing or doing and sees threats from everyone, making his narrative even more jumbled up and like a stream of consciousness.

The other characters point of views are written in the third person and while there’s still often long paragraphs, they tend to come across more measured and in control than Sergio, highlighting how his grip on reality is loosening.

The women in The Conspiracy are often described in a sexual manner with greater attention paid to their physical appearance – especially when it’s from Sergio’s point of view. It can be uncomfortable and eyeroll inducing due to the overtly sexual and lewd language used to describe them. But, with Lourdes especially, these women aren’t just there to be visually pleasing to the men. Lourdes is smart and capable and can tell when the walls are closing in and will go down all guns blazing if she sees no other choice.

There are a lot of twists and turns in The Conspiracy and while you as the reader tend to have more of an overview as to what’s going on than Sergio, there’s still surprises and people turn on one another or reveal secret plans. It makes it difficult to tell who to trust and while you learn more of Loudres’ backstory, the way the story is written means that like Sergio, you don’t always know if you can trust her motives.

The Conspiracy is full of backstabbing and political intrigue, but the writing style won’t be for everyone though with its manic energy and an unreliable narrator in Sergio. But at just over 200 pages, it’s a story that goes by at a steady pace and is an engaging read. 3/5.