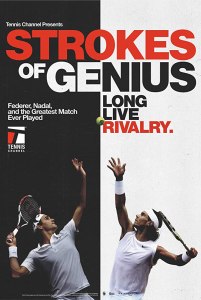 Documentary that intertwines Roger Federer and Rafael Nadal’s lives with their famed 2008 Wimbledon championship – an epic match so close and so reflective of their competitive balance that, in the end, the true winner was the sport itself.

With the world as it is at the minute I, like probably so many other people, turn to the media that brings me comfort. Like all other sporting activities, tennis has had to be put on hold, but there is one tennis documentary that I’ve loved since the first time I watched it so that’s what I found myself watching as a form of escapism.

Strokes of Genius looks at the lives and careers of Federer and Nadal, both individually and how they relate to one another. The 2008 Wimbledon Final is used as an example of what makes them two of the greatest players ever and shows how it is still considered to be the pinnacle of tennis matches. The narrative of the documentary is built around the match and while the match is intersected with footage and information about Nadal and Federer’s childhoods, and there is input from their families, friends, and other tennis professionals, the tension still builds as the match goes to five sets.

Naturally Strokes of Genius will appeal more to tennis fans, and to Federer and Nadal fans specifically, but it’s also a love letter to great sporting rivals. How those rivals can shape someone’s career and life, make them a better player, a better fighter, and the unique relationship two rivals have. While the Federer and Nadal rivalry is the focus of Strokes of Genius, it also looks at the Borg and McEnroe rivalry and the rivalry between Evert and Navratilova. All four of them appear in the documentary and it’s fascinating to see how they feel about each other and their legacy as rivals.

There are so many great quotes in Strokes of Genius about both players, from each other and from the various people featured in the documentary. But I feel this quote from Roger Federer’s fitness coach, Pierre Paganini, sums up the two men and why their matches (both generally and when they are against one another) have always been so interesting and entertaining to watch; “Roger is an artist who knows how to fight whereas Nadal is a fighter who knows how to be an artist as well.”

Strokes of Genius really is an enjoyable an informative documentary. Every time I watch it it takes me back to the summer of 2008, watching that epic match, and it reminds me how much I love and appreciate both Roger Federer and Rafael Nadal, and all they have achieved, individually and together. 5/5.