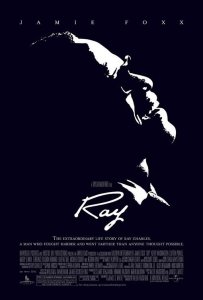 Biopic about rhythm and blues musician Ray Charles (Jamie Foxx), from his humble beginnings in the South, where he went blind at age seven, to his rise to stardom during the 1950s and 1960s.

I knew little about Ray Charles before watching this film. In fact, all I knew was the name, I didn’t even know he was blind, and I wasn’t even sure if I knew any of his songs. Turns out I did though because Ray Charles composed and performed so many songs that have transcended time and are so easily recognisable.

Ray follows Ray Charles’s life from his early twenties as he tries to make it in the music business. Along the way he meets a lot of different people, businessmen and musicians, and it’s sad that there were so many people that were willing to try and take advantage of him because he was blind, and therefore in their eyes stupid and defenceless. It soon becomes clear that Charles knows his own mind and will stand up for himself, even if that might hurt people who do care about him. It’s through flashbacks you learn more about Charles’s childhood, how he became blind, and how it was his mother who did what she could to instil a desire in him to not be dependent on anyone.

Jamie Foxx really is the heart and soul of this movie. He gives an incredible performance, full of charm and charisma but also has a steely edge too when needed. After watching Ray, I read how Foxx would have his eyes glued shut each day so he could really immerse himself into the role and put himself in Ray Charles’s shoes.

Foxx has great chemistry with the various women in the film, notably Kerry Washington as Charles’s wife Della Bea Robinson and Regina King as one of his many mistresses, Margie Hendricks, but he also has great chemistry with his band and singers on stage. The scenes where Foxx performs on stage as Ray Charles are magic. They are fun and dynamic, and you can feel the energy from the crowds watching him, it helps that the songs are great too.

While Ray does follow Ray Charles’s rise to stardom, the film ends rather suddenly. There feels like there’s so much more of Ray Charles’s story left to tell but instead it sums it up in a few lines of credits. Obviously, the film had to end sometime, and its runtime was already two and a half hours, but to end so suddenly after a major event in Ray Charles’s life seemed ill timed.

Ray is an engrossing biopic about a complex and interesting man. The music and Foxx’s performance are both fantastic and make Ray compelling viewing. 4/5.