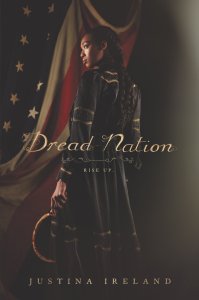 When the War Between the States was derailed when the dead began to walk the battlefields of Gettysburg and Chancellorsville, America’s history took a different turn. In this new nation, safety for all depends on the work of a few, and laws like the Native and Negro Reeducation Act require certain children attend combat schools to learn to put down the dead. Jane McKeene is studying to become an Attendant, trained in both weaponry and etiquette to protect rich white folk. It’s a chance for a better life for Negro girls like Jane, but not one Jane wants. Almost finished with her education at Miss Preston’s School of Combat in Baltimore, Jane is set on returning to her Kentucky home. But when families around Baltimore County begin to go missing, Jane is caught in the middle of a conspiracy, one that finds her in a desperate fight for her life against some powerful enemies – not all of them undead.

I find alternate history stories fascinating. They can easily not work if they change the outcome of a big historical event, but then present things are 100% better or a lot of society’s problems are solved now that change has been made. That’s not the case with Dread Nation. While the outcome of the Civil War is different as the Union states and the Confederacy have had to stop fighting in order to fight the dead, that doesn’t mean prejudices and racism has disappeared.

Jane and the other Black girls at her combat school now have a skill that can be used by society, but that doesn’t mean they are treated well by white people, especially those in positions of power. It’s the way Dread Nation combines the horror of racism with the horror of zombies that is really interesting. Jane is not just fighting against the dead, but also the systematic racism that’s prevalent in every situation she encounters.

Jane is a great character. It took me a little while to warm to her as she’s so headstrong and doesn’t know when to stop when it comes to answering back her superiors. But she’s also smart, resourceful, and can lie like a rug. She’s one for tall tales and can think outside the box which is important when she’s put in dangerous situations.

Her reluctant friendship with Katherine, another girl from the school who can pass for white (which in term brings about a lot of interesting discussions of race and how Katherine feels about what her perceived skin colour can get her), is great as they are so different. Jane is a rule-breaker, constantly looking to learn things people would rather people like her didn’t, whereas Katherine is more reserved, looking forward to the life of an Attendant and doesn’t wish to rock the boat. They are both extremely capable of taking down the undead, or shamblers as they’re known.

The shamblers are unsettling and the way they’re described makes their presence felt almost constantly. They are a threat that’s always on the peripheral of Jane’s life, and when one or two or a dozen are near, it’s a fight to survive.

Dread Nation is a fast-paced, action-packed story with an interesting premise that lives up to the potential. It’s the first book in a series and I’m looking forward to continue it as there’s still so much to learn about the shamblers, how they group together, and what the government of each state is planning to do about them. 4/5.