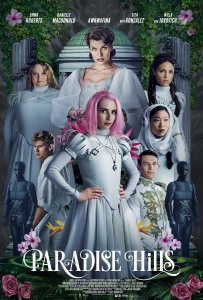 Uma (Emma Roberts) wakes up in Paradise Hills, an apparently idyllic reform school for wealthy young ladies, but things are not what they seem.

Honestly, I was not sure what to make of Paradise Hills to begin with, but I slowly got captivated by the whole look of the film and that unsettling feeling that something isn’t quite right at Paradise Hills.

Uma is strong-willed and opinionated – two reasons why she was sent to Paradise Hills as it’s where she can learn to become a better version of herself aka the version that her mother wants. At Paradise Hills she meets other girls who are in a similar position to her. Chloe (Danielle Macdonald), Yu (Awkwafina) and Amarna (Eiza González) are all there for different reasons but they are also all content with who they are.

The relationship that forms between them all is one of love and support. They are solid friends who look out for and help one another. The moments there are tension between them are not because of what one girl is thinking, but because of the situation they’re in and it’s circumstances that threaten to tear them apart.

There’s an other worldly beauty to Paradise Hills thanks to the art department. The production design, the hair, the make up and costumes makes Paradise Hills (the place) seem so far removed from what we know. It often gives off a twisted Alice in Wonderland vibe, especially with all the roses everywhere and the obsession with mirrors. To carry on the Alice in Wonderland analogy, The Duchess (Milla Jovovich), who runs Paradise Hills, almost fills the Red Queen role. She’s in control of everything, though she can lose her cool in a spectacular fashion, she’s obsessed with roses and she’s the only person in Paradise Hills whose clothes are colourful, making her stand out from everyone else. Uma and the other girls always wear white dresses while the male servants, gardeners and attendants are also in white.

The beautiful costumes and location is a harsh juxtaposition to the thoughts and emotions Uma is going through. Paradise Hills is perfection and that’s what Uma is supposed to be learning to be, but she doesn’t want to. She knows who she is, who she loves, and she doesn’t want to change anything about herself.

Paradise Hills is so much more than I thought it’d be. The theme of women supporting women is so strong, as is the message that people (especially young women) should be happy with who they are no matter what pressures from family or society they might face. The whole production is stunning and that makes the dark underbelly of what’s really happening at Paradise Hills all the more affecting. 4/5.