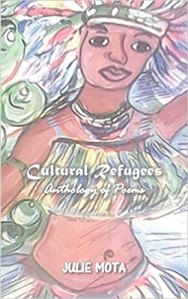 This poetry collection is an exploration on whether cultural immersions and transitional processes are producing cultural refugees in our midst. The different perspectives represented in this collection opens up dialogue on how Papua New Guineans look at their society, the changes that are happening and challenges them to discuss, embrace and pave a way forward for further exploration on the themes raised.

Cultural Refugees is split into five section each titled, Mother, Father, Children, Social Issues, and Petty Ramblings. The first three sections especially are both from that perspective and are about that type of person. It’s interesting to see that breakdown of family dynamics and compare poems in the Mother section to some in the Father section for example as you can see how differently those roles are seen.

Many of the poems in Cultural Refugees are super short with some being only a stanza long. While compositionally interesting the content of most of the short poems didn’t really resonate with me much. Some of the longer poems were in the Social Issues section and those are the poems I found more interesting because (as the title suggests) they were about events in and the society of Papua New Guinea.

I think Cultural Refugees is a poetry collection that would offer more impact if you are someone from Papua New Guinea, or maybe even the Oceania region in general, as you’d pick up the cultural references better.