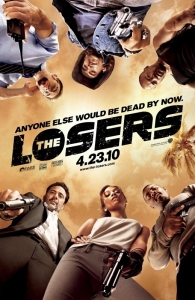 I shall preface this by saying I think this “critical review” is going to turn more into a “gushing review” as I talk about one of my favourite films.

After a CIA special forces team known as the Losers are betrayed and left for dead by their superiors and a mysterious and powerful man known only as Max (Jason Patric), the Losers wage a war against them in order to get their lives back.

A film like The Losers lives or dies on its core team of characters and The Losers thrives. From the first scene you can feel the comradery between the Losers and can feel how these often very different men fit together in a cohesive team. Jeffrey Dean Morgan plays Clay, the leader of this team. He’s more world-weary and feels responsible for the others. As a side note: I once heard someone saying Jeffrey Dean Morgan should have the career Gerard Butler has and I can’t say I totally disagree with that statement.

Anyway, back to the team. Roque (Idris Elba) is more volatile but he and Clay balance one another out. Pooch (Columbus Short) is the wheelman and has some very funny moments, while Chris Evans plays a very sarcastic and talkative Jensen who’s the tech guy. It’s honestly a delight seeing Chris Evans in a role like this, especially as The Losers was released a year before he made his debut as Captain America. To round out the Losers there’s sniper Cougar (Óscar Jaenada), who’s more of the silent but deadly type.

When a secretive woman Aisha (Zoe Saldana) comes to the Losers with a plan for them to get Max, things get complicated as they have heists to carry out in order to get to Max. Max is a fun character too. He’s shady, unpredictable nature, and always has an air of menace even though you rarely see him get his hands dirty. Think it’s down to the costuming choice.

Having read the comics this film is based on (and after seeing the film), I think The Losers is one of the best comic book movie adaptations out there. It has the same humour, the essence of the story is there, if naturally changed a little, and the actors do a great job at bringing these characters to the screen.

The way The Losers is shot is fun and interesting. A lot of the time it’s like a standard action film, but then there’s slow-motion shots of fights or sudden camera zooms; it’s like the filmmakers had fun with the concept of bring a comic book to life.

I think fun is a good word to describe The Losers. The action, the fights, the dialogue, it’s all really fun and enjoyable to watch. The character beats are good, the intrigue is there, the music choices are sometimes unexpected but great, and it has a proper tight script and a runtime close to the 90 minutes mark. The Losers is a great comic book adaptation and a really enjoyable film. 5/5. Fun fact: The Losers is also one of my go to comfort films and is a great piece of escapism.