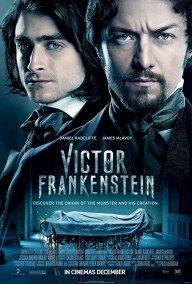 Told from Igor’s (Daniel Radcliffe) perspective, the troubled young apprentice tells the tale of his unhappy life before being rescued and befriended by Victor Frankenstein (James McAvoy) and how they worked together to create life where it should not be.

The story of Frankenstein is so well known – it’s the blueprint for the monster genre – that it is nice to see a film that does try and put its own spin on things, however that doesn’t mean it’s successful in doing so. Having Igor being the main character is new and having him being intelligent and not a snivelling sidekick to Frankenstein was interesting. He goes from being downtrodden and never having anyone care about him, or even see him as a human being, to being more self-assured thanks to Frankenstein’s friendship and belief in him – that turn around is very quick though.

McAvoy as Frankenstein is good fun, the way he annunciates certain words or gets into other characters personal spaces is unsettling as he seems like he’s living life on a knifes edge. His Frankenstein is obsessive and volatile and is indeed the quintessential mad scientist. The characteristics of this Frankenstein seems to take a lot of inspiration from Robert Downey Jr.’s Tony Stark and Robert Downey Jr.’s Sherlock Holmes. In fact, the tone and filming and editing style seems to be trying to emulate the Guy Ritchie Sherlock Holmes films. There’s the bickering relationship between Frankenstein and Igor, the random slow-motion shots in action sequences, the illustrated title cards, and one scene where Igor runs through a forest seemed to be a poor imitation of a sequence in A Game of Shadows.

Besides from the ethical dilemma of what Frankenstein and Igor are trying to achieve, the main antagonist for them is Inspector Turpin (Andrew Scott) who is investigating the thefts of human and animal bodies parts. He is also obsessive and unfortunately quickly becomes a cartoonish villain – though a verbal sparring session between him and Frankenstein is one of the more compelling parts of the film.

The editing in the scenes where Frankenstein and Igor have successfully animated a dead body and then everything goes wrong is not good. Especially in the final showdown it is difficult to keep track of where characters are in relation to each other and to generally have a good idea of the space they are currently inhabiting. It’s hard to keep track of what’s happening and minor antagonists are dispatched so quickly it’s laughable.

While Victor Frankenstein does attempt to breathe new life (ha!) into a well-known story, in the end the final act becomes a clichéd monster movie and the lead up to it often feels like you’ve seen it before due to character and stylistic choices being so similar to previous big franchises. 2/5.