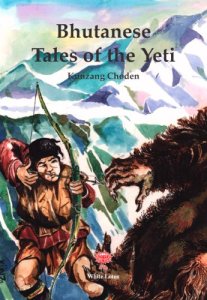 Bhutanese Tales of the Yeti is a collection of twenty-two stories set in four different regions of Bhutan. The presence of the yeti is ubiquitous to the kingdoms of the Himalayas, where beliefs and attitudes related to it go beyond scientific judgment and analysis.

This short story collection is really quite interesting. Choden has listened and talked to village elders throughout Bhutan to write down the stories or folktales that had previously just been verbally passed down the generations. The way the stories are written are simple but effective and they do feel like you’re just listening to a tale that often has some sort of lesson for the listener to learn. A lot of the stories seemed like fables with the people who encountered the yetis (or the migoe as the Bhutanese call them) learning something, or making horrendous mistakes that then the listener will learn from.

The migoi are often described as “a giant hairy man with the features of a monkey”. All of the descriptions are very vivid, especially for the female yetis with their “huge sagging breasts… swinging and rolling on its chest” and there’s also illustrations in Bhutanese Tales of the Yeti which was an unexpected but nice surprise and it really adds to the stories. Everyone has an idea of what a yeti looks like thanks to popular culture, but to see how the Bhutanese sees them, which is generally similar to the Western version but has some different things like how they possess the “dipshing” which enables it to turn invisible at will.

Some of the stories in Bhutanese Tales of the Yeti are quite gruesome as the people who encounter the yeti either anger it and therefore it harms them, or from their own fear or desire to be perceived as strong, they do their best to capture or kill the yeti.

Bhutanese Tales of the Yeti is a short but interesting read. It’s fun to hear different stories about yetis and how while they generally have similar attributes throughout the different regions of Bhutan, there are some differences in terms of the spirituality or legends surrounding the yetis. 3/5.