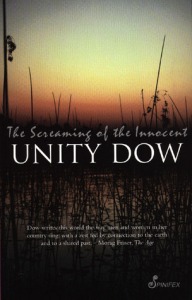 When a twelve-year-old girl goes missing near her village, the local police tell her mother and the villagers that she has been taken by a wild animal. Five years later, young government employee Amantle Bokaa finds a box bearing the label ‘Neo Kakang: CRB 45/94’. It contains evidence of human involvement in the affair. So begins an undercover struggle for justice and retribution.

Predominantly set in a rural village in Botswana in 1999, The Screaming of the Innocent is a story of ritual murder and a cover up. Have to say I found the opening chapters very difficult to get through and uncomfortable to read. They are set in 1994 and follow the men who are watching young Neo and planning how they are going to take her. The description in those chapters is vivid as you get into the minds of deprived but powerful men, as they watch Neo, describing her young body in a sexual manner. It almost made me feel queasy and that was the most striking part of the book. Then there’s the five-year time jump, and it’s not till much later that you discover what exactly they did to Neo and again it’s in graphic detail.

The Screaming of the Innocent is a relatively short book (just over 200 pages) and I thought the way the story was told was interesting. From the beginning you know who the men are who took Neo, but you don’t know how they got away with it – was it corruption or incompetence. It’s a fight for justice as long-lost evidence is discovered and someone who wasn’t even in the same region when the girl was taken, is pulled into the village’s turmoil and becomes their spokesperson.

While The Screaming of the Innocent is told from multiple perspectives as different characters remember what happened after Neo’s disappearance all those years ago, Amantle could be called the main character in the present. She discovers the evidence and has no idea of the impact it’ll have on her life or those in the village she’s just arrived in. She is someone who wants to fight for what’s right and is very earnest. She has connections to lawyers through friends and she almost has a fake it till you make it in her quest for the village’s to find out the truth. It can be a little grating as she’s so serious and focused and doesn’t always seem to realise the potential consequences of her actions as she’s convinced her method is the best.

The scenes where Amantle and her lawyer friends discuss the case and theorise what might have happened to Neo and how and why the evidence ended up where it did for five years was one of the most interesting parts of the story. The Screaming of the Innocent doesn’t feel complete though as while Amantle gets the answers she seeks, there’s still the longer fight for justice still to come.

The Screaming of the Innocent is one of those crime/mystery stories where by the end of it you as the reader know the answers, and even some of the characters do, but that doesn’t mean they’re good answers or ones that give people closure or justice. It’s a bit frustrating really as personally I like my crime stories where everyone gets their comeuppance.

Still, The Screaming of the Innocent being set in the 90s and a place and culture so different to my own was interesting. I didn’t always like how it was written, it seemed very simplistic at times – especially after the impactful opening chapters – but the story was a compelling one. 3/5.