It has been a long time since I’ve done this, almost five years in fact. I last shared all the physical books on my TBR in January 2016, the time before that was April 2014 – so really this is long overdue. Please don’t go and compare my TBR now to my TBR in 2016 or 2014 as I’m sure there’s going to be books here that were on my previous TBR’s and that’s just embarrassing.

This time I’m going to share the physical and digital books, whether that’s on audio or my kindle, I have in my possession. I have to say earlier this year I did go through my bookshelves and unhauled over twenty books so this TBR could’ve been worse! Though I’ve also had my birthday since then and was gifted more books, so it probably evens out.

Before I start I just wanted to flag I’ve currently got a giveaway of boxes of bookish stuff happening on my Twitter, it closes on 22 November so check it out if you’re interested in that sort of thing.

This list is split into four sections; audiobooks, books I have with me in my flat, kindle books, and books that are at my mum’s place. I do not have room for all my books, so my mum is kind enough for me to keep the majority with her. Every now and then I take the books I’ve read but want to keep to hers and then pick up more books I’ve yet to read to bring back with me.

Any books with an asterisk * symbol are books for my Read the World Project.

Audio:
I do get audiobooks from my library, either via RBdigital or BorrowBox, but these three are via Audible as I do sometimes get a subscription/extra tokens if there’s a good deal on and then stock up there.
– The Old Drift by Namwali Serpell* – I’m currently reading this
– Red Seas Under Red Skies by Scott Lynch
– The Republic of Thieves by Scott Lynch

In my flat:
Fun fact, I have no bookshelves in my room (it’s a flat share) so I have all my books stacked in my wardrobe and then a little TBR organiser from Miss Bohemia. These are the books I’m most likely to read and review next.
– Loveboat, Taipei by Abigail Hing Wen
– Golden Boy by Abigail Tarttelin
– Infinity Son by Adam Silvera
– The Ultimate Tragedy by Addulai Sila*
– Loveless by Alice Oseman
– Gemina by Amie Kaufman and Jay Kristoff
– Shepherd of Solitude by Amjad Nasser*
– The Bloodprint by Ausma Zehanat Khan
– Palestine +100 edited by Basma Ghalayini*
– The Last Pilot by Benjamin Johncock
– Child Soldier by China Keitetsi*
– The Secret Fire by CJ Daugherty and Carina Rozenfeld
– The Madwoman of Serrano by Dina Salustio*
– What Would Boudicca Do? by E. Foley and B. Coates
– Angel Mage by Garth Nix
– One of Us is Next by Karen M. McManus
– Dangerous Remedy by Kat Dunn
– The Bear and The Nightingale by Katherine Arden
– The Grace Year by Kim Liggett
– The Gloaming by Kirsty Logan
– Common People edited by Kit de Waal
– Flâneuse: Women Walk the City in Paris, New York, Tokyo, Venice, and London by Lauren Elkin
– Black Widow: Forever Red by Margaret Stohl
– Black Widow: Red Vengeance by Margaret Stohl
– To Best the Boys by Mary Webber
– The Sisters Grimm by Meen van Praag
– Descendants: Isle of the Lost by Melissa de la Cruz
– Descendants: Return to the Isle of the Lost by Melissa de la Cruz
– Descendants: Rise of the Isle of the Lost by Melissa de la Cruz
– Descendants: Escape from the Isle of the Lost by Melissa de la Cruz
– The Ladies Upstairs by Merle Collins*
– After the Crash by Michel Bussi
– Why I’m No Longer Talking to White People About Race by Reni Eddo-Lodge
– Girls on Fire by Robin Wasserman
– The Good Girls by Sara Shepard – currently reading this
– How the Soldier Repairs the Gramophone by Saša Stanišić*
– Feminists Don’t Wear Pink and other lies curated by Scarlett Curtis
– An African in Greenland by Tété-Michel Kpomassie*
– Children of Virtue and Vengeance by Tomi Adeyemi 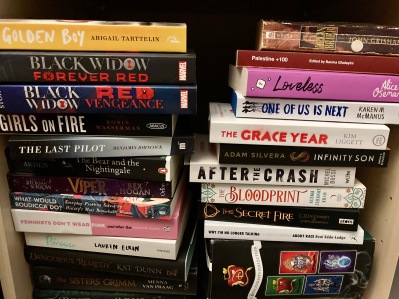 Kindle:
Now, besides the Read the World Project books, my kindle books really aren’t a priority for me. It’s my physical TBR I’d like to get down to a manageable level one day. Still, I thought I’d share what I had unread on my kindle in case anyone was interested.
– The Budapest Protocol by Adam Lebor
– Area 51 by Bob Mayer
– The Lie by C.L. Taylor
– Scarlet Odyssey by C.T. Rwizi
– A Hero at the End of the World by Erin Claiborne
– Who Censored Roger Rabbit? by Gary Wolf
– Where She Went by Gayle Forman
– Brilliance by Marcus Sakey
– Beyond the Rice Fields by Naivo*
– Mama Hissa’s Mice by Saud Alsanousi*

At my mum’s place:
Generally speaking, these are the books I’d like to get to one day. This is where a lot of my unread classics live, or books in the latter half of a series where I’ll probably need to reread the previous books as it’s been so long since I’ve read them but I do still want to finish/continue the series.
– Oblivion by Anthony Horowitz
– Black Panther: Complete Collection Vol. 3 by Christopher Priest, J. Torres, Sal Velluto, Jorge Lucas, – Ryan Bodenheim, Jon Bogdanove, John Buscema and Paolo Rivera (I actually bought this volume years ago like an idiot not realising it was the third one. I’ve since read the first volume but still need to get my hands on a copy of the second volume before I can actually read this)
– Portrait of a Spy by Daniel Silva
– Last Man Standing by David Baldacci
– Whiskey Tango Foxtrot by David Shafer
– The Riddle of the Sands by Erskine Childers
– The Collegians by Gerald Griffin
– Burn the Sky by Gilly MacMillan
– Wylder’s Hand by J. Sheridan Le Fanu
– Nevernight by Jay Kristoff
– City of Mirrors by Justin Cronin (This book is an example of where I want to reread the first two books in this trilogy before getting to the final one as it’s been so long since I’ve read this series)
– Sekret by Lindsay Smith
– The Poisoned Island by Lloyd Shepherd
– Lady Audley’s Secret by Mary Elizabeth Braddon
– Always Looking Up by Michael J Fox
– Know Your Place: Essays on the Working Class by the Working Class
– Truth or Dare by Non Pratt
– Assassin’s Creed: Renaissance by Oliver Bowden
– Fahrenheit 451 by Ray Bradbury
– The Bourne Identity by Robert Ludlum
– Bulldog Drummond by Sapper
– Movie Geek by Simon Brew
– The Complete Stories of Sherlock Holmes by Sir Arthur Conan Doyle
– Tuck by Stephen R. Lawhead
– The Dark is Rising Sequence by Susan Cooper
– Fractured by Teri Terry
– Shattered by Teri Terry
– A Conjuring of Light by V.E. Schwab
– A Gathering of Shadows by V.E. Schwab
– Vengeful by V.E. Schwab

In total I have 82 books on my TBR: 3 on audio, 10 on kindle, and 69 physical books. I’m currently reading two of those, one physical and one audio, so really it’s 80 books I’ve yet to pick up. Though that could be considered a lie as I think there’s at least a handful of books here I’ve attempted to read and then put down because I couldn’t get into them for whatever reason – I do plan to go back to them though!

Now you all know I like a chart so here’s a couple. The first is a breakdown of the authors gender on my TBR – as you can see it’s pretty much an even split.

And the second is the genres on my TBR, they are quite broad genres to be honest as I haven’t edited my spreadsheets recently.

So 80ish books on my TBR. How many books are on your TBR? Do you do unhauls every now and then or is your collection just continuously growing? Do you keep track of your unread books? I have a couple of spreadsheets and Google docs which are helpful – one of which I got from Brock Roberts at Let’s Read on YouTube.

And, if you’ve got this far, please do let me know if there’s any books on my TBR you’ve read and enjoyed – it just might make me get to it quicker!