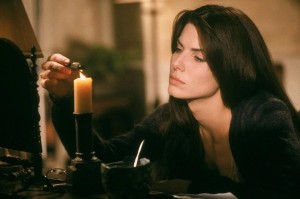 I watched Practical Magic for the first-time last October and loved it – it’s definitely going to be a film I watch on the run up to Halloween each year going forward. I loves everything about it, the story, the clothes, the music, that amazing house, and all the characters but my favourite (as the title suggests) was Sally.

Sally is a witch and she and her sister Gillian (like all the Owens women) are cursed so that any man who they fall in love with will die. Sally is determined not to fall in love and have children because her father died when she was young, and her mum left her and her sister with their aunts due to her grief and she doesn’t want to go through that. Life doesn’t always work out that way though.

While her sister is a bit of a wild child, Sally is the sensible, responsible one who likes to keep things pretty ordinary. She has her little shop, she has her daughters, and she is quite content with all that. Naturally things don’t stay that way, but she impresses herself with how resourceful she can be and the lengths she’ll go to, to protect her sister and the rest of her family.

Sally is a very talented witch and she’s quick-thinking when it comes to magic and potions. I just love how Sally deals with things. Sometimes she bottles up her emotions and pushes people aware because she thinks it’s safer for her, but she has such a big kind heart. She and Gillian are the best sisters I’ve seen on screen for a while and just generally Sally’s relationship with the different members of her family are so strong and important.