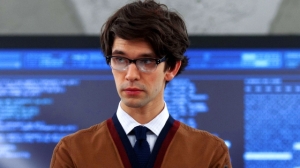 Yes, that title amuses me. There are very few characters I could think of with names beginning with Q, I suppose I could’ve gone with Quicksilver, but I thought I’d go for the head of Q Branch in MI6.

I didn’t realise how long ago it was that I watched and reviewed all the James Bond films aka my Bondathon but that was in 2015. I still have fond memories of Desmond Llewelyn’s portrayal of Q. I especially liked his dynamic with the various Bond’s but the Timothy Dalton one especially stands out.

While there have been a few different actors as Q and I like the core elements of the character a lot no matter who plays him, my favourite is the newest incarnation. I think it was clever to have a young, nerdy-looking guy as the head of Q Branch and the one inventing and organising all the engineers making these fancy cars, guns and gadgets. It makes him stand out from the previous iterations of the character, and it offers a new dynamic between Q and the other characters – especially Bond.

I love the respect James Bond and Q have for one another, even if they bicker and Bond doesn’t return the equipment in one piece – if he returns it at all. Q is obviously extremely smart but he’s also a little arrogant which can be his downfall. Q is loyal and resourceful and a brilliant hacker. While there’s only small hints of it in Skyfall and Spectre, I do like the nods of his working relationship with both Tanner and Eve Moneypenny. It helps flesh out the world of MI6 outside of James Bond.