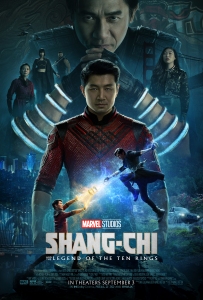 Shang-Chi (Simu Liu) has been living a normal life in San Francisco with his friends including his best friend and co-worker Katy (Awkwafina) but that changes when his father Wenwu (Tony Leung) sends his men after him and pulls Shang-Chi back into the world of the Ten Rings.

I have seen Shang-Chi and the Legend of the Ten Rings twice now (and there’s a good chance I’ll see it a third time in the cinema) and I really truly love it. While almost naturally there’s a big CGI-heavy showdown at the end, that doesn’t lessen the impact of this film, and as it’s a very CGI-heavy showdown that still puts the focus on the characters and their relationships, it works and is still very enjoyable. Plus, it pulls in elements from Asian culture that we just haven’t seen before in the MCU so it doesn’t feel like the typical end of the world scenario.

Shang-Chi and the Legend of the Ten Rings is a story of a family, and perhaps more than that it’s a love story. But not the kind of love story you’d expect with the superhero lead having a big romance. Here the love story is between Shang-Chi’s parents, Wenwu and Li (Fala Chen), and how their love shaped each other and their children. Throughout the film there’s flashbacks to Shang-Chi’s childhood (played by Jayden Zhang as a child and Arnold Sun as a teenager) to see the events that shaped him into the adult he is now. The way these scenes are interspersed throughout the film always feel natural and are complimenting what’s happening in the present. These scenes, while often more family and relationship focused, are just as compelling as the action sequences that are happening in the present. Ever single flashback feels important and adds something to the characters involved; whether that’s Shang-Chi, Wenwu, Li, or Shang-Chi’s sister, Xialing (played by Meng’er Zhang as an adult, Elodie Fong as a child and Harmonie He as a teenager).

Having these flashbacks scattered through the film means that the main action and story of Shang-Chi and the Legend of the Ten Rings kicks in very quickly. After a prologue narrated by Li (and all in Mandarin) telling the backstory of Wenwu, the ten rings he possesses, and how the two of them met and fell in love, it’s straight into the everyday life of Shang-Chi and Katy and how they both quickly get caught up in Wenwu’s schemes. The first action sequence is set on a moving bus and straightaway you can tell that this is a film made by people who know how to shoot fight and stunt sequences – and it’s clear that Simu Liu (like other cast members) put in many hours of stunt and fight training because it’s easy to believe that he knows martial arts.

All the hand-to-hand fights are just thrilling to watch and the way they’re choreographed often shows little character moments in them. Character’s fighting styles aren’t all the same and Shang-Chi incorporating a headbutt (something far more American than anything his father would’ve taught him) into a fight is a fun little moment.

The MCU often has a problem with its villains; namely that they’re pretty generic and forgettable. The two main exceptions to this rule are Thanos and Loki and now there’s a third with Wenwu. He is a villain, he is a murderer and a conqueror, but he can love though over time it becomes twisted into something else. He is an understandable and complex villain and his connections to Shang-Chi and Xialing makes him compelling and the conflict between the hero and villain that more impactful.

Shang-Chi and the Legend of the Ten Rings is one of my new favourite MCU movies and is definitely one of the great origin stories of the MCU. It’s fun and vibrant with great characters, fights and visuals and overall, it feels like a breath of fresh air in the MCU. Also, I appreciated how the comedic moments were handled throughout the film. Katy is the main comedic character but her jokes and comments are never to the detriment to a dramatic or sombre moment. Plus, she feels like a real character by actually having her own family connections and skills that can aid the hero. I honestly did not expect to love this film as much as I did and I can’t wait for Shang-Chi and to meet other characters in this universe because i feel his dynamic with them would be so interesting. 5/5.

Also got to give a shout out to whoever put together the trailer for Shang-Chi and the Legend of the Ten Rings. There is really very little of the movie in the trailer, and of the third act especially. In some ways it’s good as there were so many surprises to be had when watching the film but in others it’s not as I thought the trailer was fine but it didn’t make me desperate to see the film. But maybe that was for the best as Shang-Chi and the Legend of the Ten Rings has far surpassed any expectations I may have had.