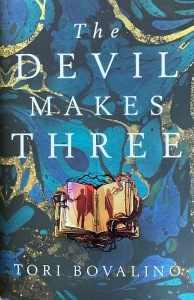 When Tess and Eliot stumble upon an ancient book hidden in a secret tunnel beneath their school library, they accidentally release a devil from his book-bound prison, and he’ll stop at nothing to stay free. He’ll manipulate all the ink in the library books to do his bidding, he’ll murder in the stacks, and he’ll bleed into every inch of Tess’s life until his freedom is permanent. Forced to work together, Tess and Eliot have to find a way to re-trap the devil before he kills everyone they know and love, including, increasingly, each other.

I’ve been getting the book-only Illumicrate subscription for the past six months and this is the first book I’ve actually read from them. That’s not necessarily anything against the books from previous months (especially as I’m just generally not reading as much as I used to) but as soon as I read the blurb for The Devil Makes Three and looked at that beautiful but dark cover, I really wanted to read it as soon as possible. Thankfully, for a book I’d never heard of before and had just piqued my interest – I really did enjoy The Devil Makes Three.

The atmosphere in The Devil Makes Three is incredibly vivid. Even before the devil makes an appearance there’s a sense of foreboding and bleakness to both Tess and Eliot’s lives. As the story progresses you learn more about the two of them and how their relationships with their parents are strained for different reasons. Each of them are going through tough times and with Tess especially it’s made her hard and prickly. She’s been betrayed by the people (her parents) who are supposed to care about her and put her and her younger sister Nat first so she now finds it incredibly difficult to trust and rely on other people. This means that she tries to deal with what’s going on with the devil on her own before opening up to Eliot about what’s been happening to her.

The things Tess ad Eliot experience after the accidentally release the devil are truly creepy and terrible. Things they experience blur the line between dream and reality, making events even more unsettling as they (and you as the reader) are never entirely sure what’s real. There is a bit of gore in The Devil Makes Three but it’s not over the top and instead it’s ink that’s used to give you nightmares. Honestly never thought of ink as creepy/evil but the way it’s described here, how it moves and bleeds from pages and almost devours people, it’s really quite disturbing.

It’s been a long time since I’ve read a creepy/horror story and The Devil Makes Three was really very good. The ending was a little sudden and I’d have liked to see more of the consequences of Tess and Eliot’s actions on people in their wider sphere who were affected, but overall, it’s a gripping and atmospheric read. 4/5.