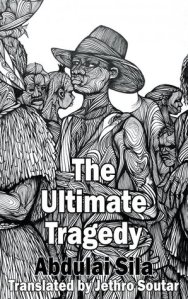 Ndani leaves her village to seek a better life in the capital, finding work as a maid for a Portuguese family. The mistress of the house, Dona Deolinda, embarks on a mission to save Ndani’s soul through religious teaching, but the master of the house has less righteous intentions. From there Ndani struggles to find love and a home as for so long she’s been told she has evil inside her.

The Ultimate Tragedy has one of those blurbs that pretty much summarises all the major plot points of the book so it was easy to see where things were going if you’d read that like I had. For that reason, the summary I’ve written here is my own version.

The Ultimate Tragedy is a story of colonial Africa from the point of view of the colonialised. This means it’s not often a happy story, especially as some Black characters start to try and reclaim their home and agency but soon find that the systems in society are working against them.

Ndani’s story, like most of the characters stories in The Ultimate Tragedy to be honest, is a sad one. There’re almost no bright moments of happiness in her life and when she does find some, it doesn’t last for long. For that reason, The Ultimate Tragedy is bit slow to read as it’s so relentlessly melancholy.

That being said, there are a few moments or wry humour sprinkled throughout. Often it comes from miscommunication or from having the benefit of hindsight as some of the things Dona Deolinda and other white characters say or do is obviously racist but it’s written in a way that there’s almost a knowing wink to it. Like, “gee aren’t these people dumb and offensive.” I know that probably sounds weird but it’s the best I can describe it. Like these characters are epitome of the White Saviour trope but they are so oblivious to the fact due to the time The Ultimate Tragedy is set, and to read that sort of story now it’s funny because of its ridiculousness.

However, that ridiculousness obviously has a darker and more dangerous side and when Ndani and her loved ones get caught up in it, the injustices they face are so sad and, like the title of the book, tragic.