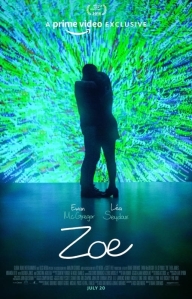 Cole (Ewan McGregor) and Zoe (Léa Seydoux) are colleagues at a research lab that designs drugs and technology to improve and perfect romantic relationships. As they become close, their relationship is threatened when Zoe discovers the truth about their relationship, sending them into a spiral of confusion, betrayal and the most intense of human emotions, love.

Zoe is such a sweet, thoughtful take on relationships, romance and what it means to be human. It’s that kind of near-future sci-fi that I love where everything is as we’d expect bar one aspect. In this instance, that thing is how evolved AI is and that androids, or “synthetics” as they’re called here, can be so lifelike that they can fool humans. They can be programmed to feel and connect with people so humans never have to be lonely.

Ash (Theo James) is one such synthetic and seeing him learn and adapt and feel does make you question the differences between humans and machines. While his code is his foundation, he’s been given memories and personality and is able to decide things for himself. Theo James does a good job at adding little hesitations to Ash’s movements and showing that as he learns, he mostly appears “human” but there’s still the odd moment with him that’s a little unsettling.

The romance between Cole and Zoe is interesting as they both seem so isolated but for different reasons. There’s a hesitancy about both of them and as more of their pasts are revealed, you begin to understand why they act that way.

As a sidenote, I really liked the relationship between Cole and his ex-wife Emma (Rashida Jones). So often you see an antagonistic relationship between ex’s, even when they’re coparenting like these two are. While there still is the odd moment of awkwardness between the two of them, it’s clear that they both still care about each other and want the other to be happy, even if it’s not with themselves.

Zoe is an interesting sci-fi/romance film. The central performances are all great and the romance between Cole and Zoe is believable. Similarities can be made between Zoe and Her, and both films have a similar melancholy vibe to them. So if you like one of those films, there’s a good chance you’d like the other. 4/5.