In May in the United States, it is Asian American and Pacific Islander Heritage Month and in honour of that Cindy from WithCindy on YouTube created a readathon where the main aim is to read books by Asian authors. Her announcement video explains it all really well and she also has a Google Doc with extra info and resources and there’s a Twitter account for the readathon too.

This year’s challenge is loosely themed around the film Everything Everywhere All At Once (which I can’t wait to see) and is meant to be easy, accessible, and open to interpretation. The reading challenges are:

These challenges can be combined if you want to make it even easier! There is a twist though. You can combine challenges and read in any order; however, each book you read should feature a character or author of a different Asian ethnicity. This is to encourage cultural diversity. I’ve made a note of each authors nationality/identity as is available online. 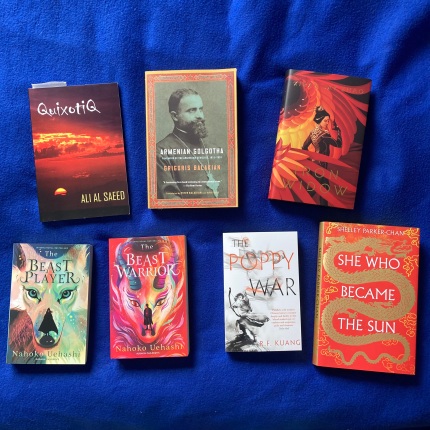 QuixotiQ by Ali Al Saeed (Bahraini)
This is a book I’ve already started once but struggled a bit with but as it’s less than 200 pages I know I can get through it if I just knuckle down and focus on it.

Written in Black by K.H. Lim (Bruneian)
A coming-of-age novel offering a snapshot of a few days in the life of ten-year-old Jonathan Lee, attending the funeral of his grandfather, and still reeling from the drama of his mother leaving for Australia and his brother getting kicked out of the house and joining a rock band. I got the ebook of this for cheap recently so it’d be good to read it this month.

Mama Hissa’s Mice by Saud Alsanousi, translated by Sawad Hussain (Kuwaiti)
Three friends who share neither ethnic origin nor religious denomination, get involved in a protest group and one of their grandmothers, Mama Hissa, warns them against it. This is another ebook.

Iron Widow by Xiran Jay Zhao (Chinese-Canadian)
While the societal aspects of Iron Widow don’t sound great, the world of giant transforming robots that can battle the mecha aliens that lurk beyond the Great Wall sounds very cool. Plus, it’s been a wile since I’ve read a sci-fi novel.

The Cabinet by Un Su Kim, translated by Sean Lin Halbert (South Korean)
This is one of the books from the 12 Books Recommended by 12 Friends Challenge and I have the audiobook. It sounds like a bit of a weird story and I love the cover.

The Beast Player and The Beast Warrior by Nahoko Uehashi, translated by Cathy Hirano (Japanese)
These two are some of the most gorgeous books I own. This is a YA duology about a girl who discovers she can talk to the huge, magical beasts of her world and becomes entangled in politics and war as she tries to keep herself and the beasts safe.

The Poppy War by R.F. Kuang (Chinese-American) and She Who Became the Sun by Shelley Parker-Chan (Chinese-Australian)
I’ve heard nothing but good things about both of these books. They’re both fantasy books that are inspired by Chinese history and it’s been a while since I’ve read an historical fantasy epic.

Are you taking part in the Asian Readathon? Or do you have any books by Asian authors on your TBR in general? I would love to hear about them.