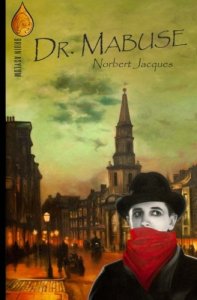 Translated by Lillian A. Clare.

Set in 1920s Germany, Dr. Mabuse is a greedy anarchist who assumes many guises and controls a legion of henchmen (both willingly and unwillingly) through money, power, and telepathic hypnosis. State prosecutor Norbert von Wenk gets put on Dr. Mabuse’s trail after strange things happen at gambling halls and so begins a game of cat and mouse.

Dr. Mabuse is a great villain. He’s truly evil and is a power-hungry master-manipulator. He can hypnotise people to do what he wills, whether it’s cheating at a game of cards or even taking their own life. The way the hypnotism is described by one of he’s victims is very unsettling and uncomfortable, especially when he’s forcing his will upon a woman. It is for all intents and purposes rape of the mind and body. He’s also great at disguises and putting on different personas so at times von Wenk and Dr. Mabuse are in the same room and may even be talking to one another but von Wenk has no idea that it’s the man he’s after until later.

The writing style of Dr. Mabuse is that typical late nineteenth century style. The language, the mystery, and the action reminded me both of Sherlock Holmes and Raffles at times. If you like stories about those characters – though they’re both far more heroic than Dr. Mabuse – then you might like this one too.

Dr. Mabuse is a fun, pulpy, mystery. It’s full of twists and turns and though some of them are unbelievable – how this man manages to evade capture at some points incredible – but it just goes to show how Dr. Mabuse is the kind of criminal mastermind that’s always a few steps ahead. Though it goes to great lengths to show how smart Dr. Mabuse is, it doesn’t do so at the detriment of von Wenk. He’s a pretty smart and capable man himself, and has enough pull with the law to get police officers (and a lot of them) where he needs them quickly. It is fun seeing von Wenk put things together and try and solve the case. There’s a lot of surprises and when some of Dr. Mabuse’s accomplices would rather die than say anything about him, von Wenk faces a lot of dead ends.

Dr. Mabuse is a pretty enjoyable read and being set in 1920s Germany it’s interesting to see the effects of the First World War on the German citizens and society. They were often only passing mentions but it helped make me understand the place that Dr. Mabuse was operating in. 4/5.