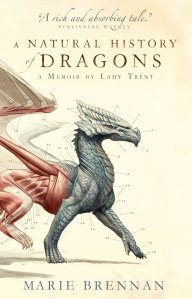 Everyone knows Isabella, Lady Trent, to be the world’s preeminent dragon naturalist. Here at last, in her own words, is the true story of a pioneering spirit who risked her reputation, prospects, and her life to satisfy scientific curiosity; of how she sought true love despite her lamentable eccentricities; and of her thrilling expedition to the mountains of Vystrana, where she made discoveries that would change the world.

First off, I’ve got to say how much I enjoyed the narrator for this book and while I’m sure I’d still have liked A Natural History of Dragons if I’d read a physical copy, the audiobook was brilliant and if/when I carry on with the series, I’ll definitely be doing so via the audiobooks. It brought Isabella’s story to life in a way I wasn’t expecting. The narrator had a wonderful old posh British lady kind of voice and it just worked. It was easy to imagine an elderly woman writing her memoir and throwing in the odd aside about what she’s learnt since and how her attitude towards certain things might’ve changed in the intervening years.

A Natural History of Dragons is a historical fantasy memoir of a fictional character who lives in a world that’s inhabited by dragons. I would say there is not that many dragons in a book titled A Natural History of Dragons but I didn’t mind that. Instead, it’s more character focused as a good portion of the novel is about Isabella’s childhood, how she became obsessed with natural history and dragons and how that hindered/helped her find a suitable man to marry. I liked how A Natural History of Dragons spent time building Isabella as a character and the world around her which often feels like a nineteenth century world. There’s a lot about the upper society and how Isabella doesn’t fit in with her interests and not being very lady-like but still knowing that she needs to marry in order to be a respectable daughter. I liked the struggles Isabella goes through personally just as much as her “professional” ones when she gets involved more with dragons. It’s interesting to see her straddle this line between respectability and following her passions and how love could possibly combine the too.

The main dragon stuff comes in the latter half of the book as Isabella gets to join an expedition to Vystrana. I really liked how while dragons were known and excepted creatures in this world, the people don’t know too much about them. Isabella and her fellow naturalists are what I presume were like the people who first started any animal in our world, especially potentially deadly ones like sharks. It’s clear in the beginning they don’t know a lot and some of their theories are wildly inaccurate while others are the basis of bigger discoveries. I liked how there’s references to things later in Isabella’s life throughout the book but especially when she comments on their research process or ideas and how they might’ve changed over time. I also appreciated the trial and error of their expedition and how Isabella gets into various scrapes due to her impulsiveness.

I really enjoyed A Natural History of Dragons. It’s a book I’ve seen around over the years but the fact it’s a fictionalised memoir did put me off a bit. I’m glad to say I’m wrong and that interesting narrative choice really works, especially via the audiobook. 5/5.