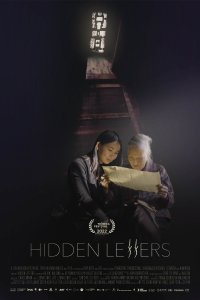 Documentary about how in modern day China, two women strive to preserve Nushu, an ancient secret language which bonded generations of Chinese women together through centuries of oppression in a clandestine support system of sisterhood and survival.

Hidden Letters paints a somewhat bittersweet picture of how the Nushu language is trying to be preserved and how the women preserving it are doing their best to keep their independence in a modern world. Hidden Letters covers culture, history, language, and how women fit into all of that.

Needless to say, I’d never heard of Nushu before and Hidden Letters was an interesting and informative documentary. There’s not a lot about how Nushu was invented as a language as it was something that was only came to light in the 1980s and often women had their writings buried with them when they died. It’s a secret language where they could talk about the hopes and fears when they were often kept locked in their chambers with their feet bound. It speaks of women’s strength when they refuse to be silent even when awful things are happening to them.

One of the young women the documentary follows is Hu Xin, a young divorcee, but even though her husband abused her, she feels like a failure as she’s neither a wife nor a mother and she feels like the whole point of being a woman is being a mother. It’s kind of sad that she feels this way but her friendship with He Yanxin, an older woman and an expert in Nushu, is lovely and continues the tradition of sisterhood that is such a big component of the language.

Simu Wu is the other young woman Hidden Letters follows and she faces similar difficulties when trying to find love. She sees the value in learning Nushu and the artwork she creates where the language is the focus and it’s a hobby she enjoys. Her fiancé on the other hand, sees it as frivolous and wants her to instead get a second job as getting enough money for them to buy a house and have a child is the only thing that matters to him. Her surprisingly progressive parents though are pretty awesome though.

It’s equal parts frustrating and farcical seeing how men just don’t understand the importance of Nushu and how it’s a uniquely feminine thing. At one point a group of two men and two women discuss on how to make Nushu more mainstream and one of the men says that Nushu has value but the main this is “how to exploit that value so it can be better marketed”. When one of the women pushes back on that idea and she’s quickly shut down. Sure, it’s a huge generalisation but women see the beauty and the cultural significance of the language as while things are certainly better compared to their ancestors, they can still relate to the horrible things the women experienced. Meanwhile, the men just want to find a way to commercialise Nushu and make money from it – exploiting women’s secret language like women have been exploited for generations.

Hidden Letters is a thoughtful and interesting documentary. Its observations are poignant as it shows how important and impressive Nushu is and that women and their voices still struggle to be heard today. 4/5.