Top Ten Tuesday is a feature run by BrokeAndBookish each week – I’m thinking I might not take part every week but just see if a week takes my fancy. This week it’s all about books you picked up on a whim, I’m going to take this as books I bought on a whim – so books that I’d never heard of, hadn’t read reviews for and books that I may have seen in passing on the internet but knew very little about. On to the books!

Sudden Death by Alvaro Enrigue
I bought this book in Any Amount of Books, a lovely second-hand book shop off Leicester Square, the last time I was in in London. I had never heard of it before and when I read the blurb I was still none the wiser what it was actually about. It’s something to do with a tennis match and it mentions a lot of different historical figures and time-periods. I have no idea what it’s about or whether I’ll like it but that’s what made me pick it up.

The Secret Fire by CJ Daugherty and Carina Rozenfeld
I bought this one during the London Bookswap Crawl and I had never heard of it before. The striking cover was what drew me to it and then it was only a couple of quid so I ended up buying it. I haven’t read it yet but I have a feeling I’m going to get to it sooner rather than later.

Asking For It by Louise O’Neill
So I had heard about this book through murmurings on the internet but I hadn’t read any full reviews. Then one day I was browsing Amazon, clicking from book to book and I saw Asking For It again and it wasn’t that expensive so I bought it. My review is here. END_OF_DOCUMENT_TOKEN_TO_BE_REPLACED 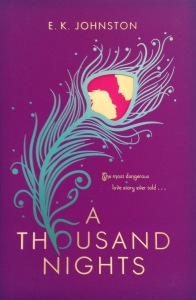 When the formidable king Lo-Melkhiin arrives at her desert home, she knows that he will take her beautiful sister for a wife. If he does, she knows that her beloved sister will be dead within days. She takes her sisters place and joins Lo-Melkhiin in his palace, there she discovers a strange magic that connects the two of them and her own power. As she survives each night by telling her husband stories, her power grows as she sees visions of her sister and the desert. Will the power growing inside her be enough to kill the king?

A Thousand Nights has a wonderful female protagonist and her relationship with her sister is the highlight of the book. I never really realised till the end of the book that you never find out the names of a lot of these characters, the only named characters are men such as Lo-Melkhiin and the solider Firh Stonetouched. I think this is an interesting choice as you see that in many ways, any of the 300 girls chosen before our heroine could have been the hero in the tale as our heroine is standing up for all the girls that have come before her and died by the hands of Lo-Melkhiin.

There are a lot of great female relationships in A Thousand Nights. Lo-Melkhiin’s mother still manages to believe in her son and that belief rubs off on to our heroine. The relationships between our heroine and her mother, sister and sisters-mother are all filled with love and respect, while the relationship between her and the women in the palace are often mutually beneficial and the women work together to look after her. It’s great to read a book where the women are the strong and powerful ones, who ignite change in people and make each other strong.

The magic that the heroine possesses isn’t easy for her to understand or control, often she does things with it without realising. The way the magic is described makes it sound incredibly beautiful and as she learns where it came from and how to use it, she realises that she could be as strong as the king.