As a squad of U.S. Marines attempt to rescue a group of civilians during an extra-terrestrial invasion of Los Angeles, they become the last line of defence for the city.

There are a lot of characters in Battle Los Angeles and they spend most of their time in full tactical gear including a helmet, so it is often difficult to tell them apart. Plus, as there’s so many characters who have only the bare minimum of character traits to make them stand out, it’s hard to keep track of who has just been killed and who is still alive.

The squad is led by 2nd Lt. William Martinez (Ramon Rodriguez) but the real main character is Aaron Eckhart’s Staff Sergeant Michael Nantz. He’s the one that has more than a superficial backstory and has some dramatic moments too – he gets a rather good speech where everyone else looks at him with respect.

Michelle Rodriguez’s Tech Sergeant Elena Santos is one of the more memorable characters, that that could be because she’s one of two women in the main cast of characters. The actors all do as well as they can do with what they’re given. The characters are all pretty one-dimensional, the dialogue is full of military clichés and there’s expository dialogue every ten minutes or so.

While Battle Los Angeles is an alien invasion film it plays out more like a war film with the aliens attacking the squad from a distance, and each side taking cover, so you never really get a good look at them. When the aliens do become clearer, the creature design is not that imaginative or interesting.

There are some exciting shootouts in Battle Los Angeles but they’re unfortunately few and far between, and the slower, more serious moments seriously bog down the film. It’s also far too long and had at least three moments where you felt like it was coming to a conclusion but then things kept happening. 2/5.

The story of Chesley Sullenberger (Tom Hanks), an American pilot who, along with his crew, became a hero after being forced to land a plane on the Hudson River in order to save the 155 souls on board.

The way this story is told is different to what one might expect. The film makes you wait, for what can feel like an excruciating long time, to see the full sequence of the plane coming down onto the Hudson. There’s snippets of flashbacks throughout the film, complimenting what’s happening in the present as Sully and his co-pilot Jeff Skiles (Aaron Eckhart) try and make sense of what happened, but you have to wait to the final act to see it all come together.

The sequence of the plane coming down is dynamic and thrilling and the special effects are top notch. The sequence, along with the whole film really, brings you that pleasure of seeing people being competent at their jobs and keeping their heads in a crisis. The aftermath of the water landing shows the best people have to offer with everyone pulling together and shows how regular tour boats came to the rescue.

Sully is an incredible true story and seeing the events in the air and learning about the hearings Sully and his co-pilot Jeff Skiles had to attend to prove they made the right decision is great. Director Clint Eastwood allows the true events to speak for themselves and manages to avoid most clichés often seen in autobiographical films. Sully is a polished film with a great performances and Tom Hanks is on fine form as always. 4/5. 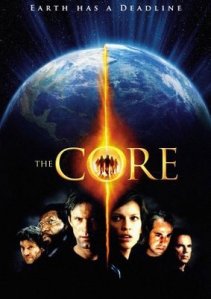 When the Earth’s core stops spinning, the only way to save the planet is for a team to drill down to the core and set it spinning again.

The Core starts with an ominous scene and from there the pace never really lets up. You’re introduced to our heroes and they figure out how to save the world with a ridiculous and dangerous plan. The action and special effects are pretty good, though some haven’t stood the test of time, the destruction of the Golden Gate Bridge is certainly memorable.

The Core has all the usual characters seen in disaster films. The team sent to jumpstart the Earth are comprised of the seasoned pilot (Bruce Greenwood), the young protégé who seems unbeatable (Hilary Swank), the nice guy scientist (Aaron Eckhart), the Government scientist who you’re not sure if you can trust (Stanley Tucci), the mad scientist who was once betrayed by someone else in the team (Delroy Lindo) and the nice guy scientists best friend (Tchéky Karyo). Back on top of the Earth you have the helpful hacker (DJ Qualls) and the General who doesn’t like to be told he’s wrong (Richard Jenkins). They might be what we’re used to seeing but one thing in The Core’s favour is that a lot of these characters have good chemistry and bounce off each other really well. Quite often you find yourself caring about them which often leads to heartache considering the film’s genre.

Besides the cheesy moments, The Core’s main problem is that it ends up being quite formulaic – there’s a problem, the crew have to figure it out, they fix it, someone may or may not die, and repeat. That being said, often you do actually feel something when one of the team ends up dead, there’s self-sacrificing moments and unlucky accidents and they both add drama to the film.

The Core isn’t necessarily a good film, but it is quite fun most of the time and has all the usual tropes for a disaster film. 3/5.