Top 5 Wednesday is a great feature created by GingerReadsLainey and hosted by ThoughtsonTomes. To find out more about Top 5 Wednesday and the upcoming topics, check out its Goodreads page. This week it’s all about unlikable characters, these aren’t the villains you’re supposed to hate, these are the protagonists or side-characters that for whatever reason you just can’t stand.

Vivi – When We Collided by Emery Lord
I was not a fan of Vivi. She is almost obnoxiously happy and though you do find out why she’s like that I never felt any real sympathy for her. She’s incredibly jealous and mean if her boyfriend does so much as talk to another girl, she is reckless and when people try and ask her why she’s doing stupid or crazy things, she just says they’re trying to control her. Vivi was probably the most unlikable character I’ve encountered in a while.

Wade/Parzival – Ready Player One by Ernest Cline
There was something about Wade that put my back up. He’s often entitled or thinks he’s so great since he’s the first to make a break through looking for James Halliday’s Easter egg, he’s also kind of controlling which is never a good quality. I think the main reason I don’t like him is because of the way he thinks of and talks about Art3mis. It’s creepy and if I ever found out a guy was that obsessed with me I’d run away screaming.

Shyama – The House of Hidden Mothers by Meera Syal
The main reason Shyama is unlikable is because she’s pretty self-centred. All she wants is a baby and in doing so she ignores her teenage daughter. She just thinks her daughter is being moody for the sake of it but doesn’t realise something more serious might be going on because she’s not paying anyone any attention but herself. If a characters self-centred, I’m probably not going to like them.

Étienne – Anna and the French Kiss by Stephanie Perkins
The main reason why I found Étienne so unlikable throughout most of the novel was because he didn’t communicate! He ends up stringing along not only his girlfriend but a friend he’s supposed to really like and care about. Plus, he’s one of those romantic leads that’s almost sickeningly perfect so that just makes him annoying.

Emma O’Donovan – Asking For It by Louise O’Neill
This is an interesting one because Emma is a really unlikable person but there’s no way she deserves what happens to her. Emma is beautiful and she knows it so she uses it to her advantage, she’s mean and bitchy to her friends, she steals from them and she always thinks she’s better than them. She is the sort of person you wouldn’t want to be friends with in school.

What protagonists or secondary characters did you end up finding really unlikable when you probably weren’t supposed to?

Top Ten Tuesday is a feature run by BrokeAndBookish each week. This week it’s all about different book settings, especially as so many popular books are set in the USA, so it’s good to share books that are set in different places to the norm.

Beautiful Broken Things by Sara Barnard
This book is set in Brighton in England. It stuck with me as I actually live about 45 minutes away from Brighton so it was fun recognising the place that the story was set.

Tokyo Heist by Diana Renn
As the title might suggest, the majority of this book is set in Tokyo. The descriptions of Tokyo are very vivid and then when the story moves to Kyoto it sounds like such a beautiful and peaceful place.

Lagoon by Nnedi Okorafor
Lagoon is set in Lagos in Nigeria – a place I’ve never been too and I’d never read a book set there either. While I have mixed feelings about the book, I loved how Lagos was described and it felt like a bustling city that may have it’s problems but was still kind of beautiful. END_OF_DOCUMENT_TOKEN_TO_BE_REPLACED

Top Ten Tuesday is a feature run by BrokeAndBookish each week – I’m thinking I might not take part every week but just see if a week takes my fancy. As the title suggests this week is all about favourite quotes I’ve read in books recently. Some of these I knew I wanted to feature straight away because they stuck with me, others I had to think about a bit. Also this could have quite easily been ten quotes from The Martian but I managed to restrain myself.

I can’t stand seeing girls hate on girls. There’s enough of that in the tabloids.
– #scandal by Sarah Ockler

If a hiker gets lost in the mountains, people will coordinate a search. If a train crashes, people will line up to give blood. If an earthquake levels a city, people all over the world will send emergency supplies. This is so fundamentally human that it’s found in every culture without exception. Yes, there are assholes who just don’t care, but they’re massively outnumbered by the people who do.
– The Martian by Andy Weir END_OF_DOCUMENT_TOKEN_TO_BE_REPLACED

While miscommunication is what often drives romance novels, there can be too much of a good thing. It often made the characters seem stupid because they weren’t picking up on social cues but at the same time it’s kind of believable because these are teenagers in love who are scared to put their feelings out there. That doesn’t make it any less frustrating though. END_OF_DOCUMENT_TOKEN_TO_BE_REPLACED

The Husband’s Secret – Liane Moriarty
This would fill the “a familial relation” section of the What’s in a Name challenge. My mum actually bought this book for herself but it sounds intriguing and is a family drama which could turn into a bit of a thriller. END_OF_DOCUMENT_TOKEN_TO_BE_REPLACED

I don’t think I’ve ever done a Book Haul post on here. That’s mainly because I don’t often buy books at all or I just get one or two during the month and it’s nothing special to write home about. Over the past month though I have accumulated a lot of books. So without further ado here’s what I’ve got. 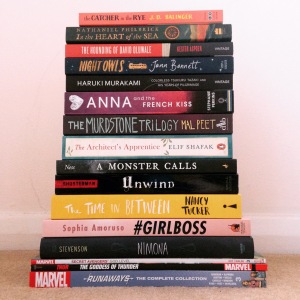 These books come from everywhere, Orbital Comics, my buddy Julie via the mini NinjaBookSwap, having poor impulse control in WHSmith’s and Waterstones and then having poor impulse control and taking advantage of the Booktubeathon discount at the Book Depository – go here for 100 books at a discount if you use the code BOOKTUBEATHON10 at the checkout – this offer ends soon.

So what do you guys think? Have you read any of the above and what do you recommend? I probably shouldn’t have acquired so many books recently but oh well – we all have these moments of weakness.

List of books:
The Catcher in the Rye by J.D. Salinger
In the Heart of the Sea by Nathaniel Philbrick
The Hounding of David Oluwale by Kester Aspden
Night Owls by Jenn Bennett
Colorless Tsukuru Tazaki and his Years of Pilgrimage by Haruki Murakami
Anna and the French Kiss by Stephanie Perkins
The Murdstone Trilogy by Mal Peet
The Architect’s Apprentice by Elif Shafak
A Monster Calls by Patrick Ness
Unwind by Neal Shusterman
The Time in Between by Nancy Tucker
#GirlBoss by Sophie Amoruso
Nimona by Noelle Stevenson
Secret Avengers Volume: 3 God Level by Ales Kot and Michael Walsh
Thor: Goddess of Thunder by Jason Aaron and Russell Dauterman
Runaways: The Complete Collection Volume 3 by Brian K. Vaughn and Adrian Alphona