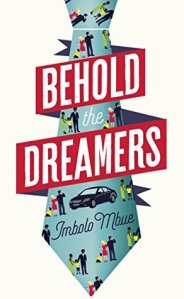 New York, 2007. After two long years apart, Jende Jonga has brought his wife Neni and their six-year-old son from Cameroon to join him in the land of opportunity. Drawn by the promise of America they are seeking the chance of a better life for them and their son. When Jende lands a dream job as chauffeur to Clark Edwards, a Lehman Brothers executive, Neni finds herself taken into the confidence of his glamorous wife Cindy. The Edwards are powerful and privileged: dazzling examples of what America can offer to those who are prepared to strive for it. But when the financial world is rocked by the collapse of Lehman Brothers, all four lives are dramatically upended.

I really enjoyed how Behold the Dreamers took place in the recent past and how it showed the many big changes in a short space of time. There’s mentions of the race for Democratic nominees for President between Hilary Clinton and Barack Obama, and how when Obama got the nomination and then the presidency how Jende saw it as a sign that he and his family could achieve anything in America. Knowing about the financial crash and how that’s going to have a huge knock-on effect on the Jonga’s and Edwards’ makes there an air of tension in the story, it’s like you’re waiting for the other shoe to drop while the majority of the characters have no idea what’s about to hit them.

There’s a lot of themes in Behold the Dreamers, a lot of them surrounding the highs and lows of being an immigrant. There’s the loneliness, monotony and uncertainty surrounding trying get the correct papers to stay in the country or to work or to get an education. There are so many hoops for Jende and Neni to jump through, but they also find their own community with fellow immigrants who have lived and worked in New York for far longer than they have.

Behold the Dreamers does a good job at showing how the American Dream is portrayed to immigrants and how over time it often becomes clear that it is an impossible dream. However, for Neni she can only see the good about life in America, especially when comparing it to life in Cameroon. Neni in sees America through rose-tinted glasses. She’d watched episodes of The Fresh Prince of Bel Air in Cameroon and thought that could be her life, and even when she watches other media like Boyz n the Hood she feels that’s the outlier, really life in America can be great for Black people like her. Her naivety and optimism are almost painful, especially when thinking about what is currently (and has been for years) going on in America and the rest of the world right now.

The Jonga’s are well-rounded characters and you can understand both Neni and Jende’s feelings when they’re trying to earn money for their families. Both of their relationships with the Edwards’ is interesting. While he never stops seeing Clark as his boss, Jende wants to look after him and protects his secrets, unconsciously getting entwined in his life far more than the average employee should. Neni on the other hand, never sees her work for Cindy (as a housekeeper/nanny for their young son) as more than it is. While she appreciates when Cindy might give her old clothes that were going to a charity shop anyway, she never stops seeing the social and economic divide between them and doesn’t see why she should help Cindy when she won’t help herself.

A lot of the time the problems the Edwards’ face often feel like #FirstWorldProblems – especially when compared to the Jonga’s. However, Behold the Dreamers makes it clear how while their lives are so different, money really can’t solve all of the Edwards’ problems. Cindy is lonely, she thinks her husband is cheating because he’s never home and always working, she drinks and often seems unhappy. Her issues are big for her and while she does sometimes try to offer Neni money or guidance, she can’t comprehend the uncertainty the Jonga’s are going through as they wait for the next immigration court date.

Behold the Dreamers covers so many themes and ideas while still making a compelling story. You want the Jonga’s to achieve their dreams, but the many barriers in their way slowly become clear and should they really spend their lives struggling for the idea of the American Dream? 4/5.