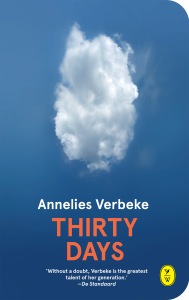 Alphonse is a friendly and observant former musician, who has left Brussels with his girlfriend Cat to live closer to her parents in the rural district of Westhoek. It’s a place that has open fields and more World War I graves than almost anywhere else in Europe. Alphonse starts a new life as a painter and decorator, and he becomes entwined in so many peoples lives. But when he, Cat and one of his clients help a group of Afghans and Syrians at a makeshift refugee camp, he learns that not all of the locals appreciate what they’re doing.

Somewhat surprisingly the first chapter in Thirty Days is chapter 30, and each chapter number decreases. While it’s a slow book to get going, this adds to the fact that the story appears to be building to something – and it certainly does build to something unexpected. Plus, like the title suggests, it each chapter is a day, something I didn’t register to begin with.

I really liked Alphonse, but I could see why his partner Cat would get frustrated with him. He’s a painter and decorator so he goes to various people’s homes to do a job but there’s something about him that causes his clients to offload a lot of their thoughts or secrets on him. He becomes involved in so many people’s lives and Cat doesn’t always like that as it takes his time and thoughts away from her and their life together. He’s a guy that’s almost too nice for his own good but his niceness is never off-putting or eyeroll-inducing.

Alphonse is victim to a lot of racism ranging from micro aggressions, being asked where he’s really from after first saying Brussels, to full on hostility, such as when a client’s neighbour accuses him of trying to break into their house. As Thirty Days is from Alphonse’s point of view, it never stops and describes how he or Cat look like, so you get to know him without any preconceptions meaning when he does experience racism it’s more of a shock and an interesting way of presenting what he faces.

Surprisingly, Alphonse doesn’t encounter the refugee camp until the last third of the book. Instead, the clients he has and his relationships with them, and his girlfriend and their friends and family, is the main focus of a lot of this story.

Thirty Days is beautifully written and it’s a moving story. The themes of being a good person, helping others but still making sure you don’t give up all of yourself are all handled well. As is both the underlying and overt racism Alphonse experiences, in every day life, and when he tries to help refugees who are just looking for somewhere to call home. It deals with so many opposites, good and evil, beauty and ugliness but it never feels preachy. Thirty Days is a compelling story and I devoured the last few chapters as I just had to know where things were going for Alphonse. 5/5.