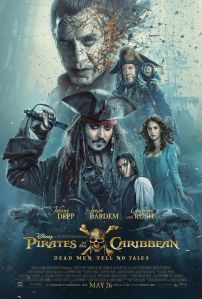 Captain Jack Sparrow (Johnny Depp) past catches up with him when undead Captain Salazar (Javier Bardem) and his crew are out for revenge. Jack sets out to find the trident of Poseidon as it might be the only thing to save him.

The Jack Sparrow you meet in this film is not like the one seen in the previous films, especially the first three. Those films he acts a bit drunk and is weird but he’s still a crazy kind of smart that he can see the moves ahead and surprise people. In Salazar’s Revenge he’s a bit past his prime, is very drunk and if he does achieve something it’s more by accident than any type of skill. Unfortunately, it makes Sparrow annoying as the film focuses more on the slapstick humour of the character than his wit and it’s kind of sad to see him like that.

Joining Sparrow on his adventure is Henry Turner (Brenton Thwaites) and Carina Smyth (Kaya Scodelario) who each have their own agendas for searching for the trident. Both are fun additions to the franchise and each do things to further the plot and seem to have their own character arcs. I did like Henry a lot, he’s his own person but you can see both of his parent’s attributes in him which is nice.

This film has a messy plot with a lot of characters and motivations. There’s a witch (Golshifteh Farahani) that serves no real point than delivering information to other characters in two scenes and then is never seen again, and there’s the British Navy once again but that plot thread is almost an afterthought.

One of the problems with this film is there’s a fair few times that the plot and character backstory contradicts what you’ve already learnt in the previous four films. This might not be as noticeable if you haven’t seen them in a while but watching this film less than a week after concluding my rewatch, I noticed multiple things that didn’t add up.

On the most part, the action looks good and is fun, the guillotine sequence is a bright point in the film but it gets very CGI heavy as the film progresses. Salazar is a menacing villain, though admittedly he’s a bit hard to understand sometimes, and the scenes between him and Barbossa (Geoffrey Rush) are pretty tense.

Salazar’s Revenge lacks the charm of the first film and while it brings back some old characters which helps add to the emotional impact of the film, it’s not that memorable. 2/5.

When Angelo (Brenton Thwaites) drops out of school and moves to California to live with his dad and to surf, his mother Jackie (Helen Hunt) follows him.

Ride is a delightful little film about family, finding your own path and letting go. Jackie is a workaholic but she is also very overprotective and caring towards her son. She definitely comes across as super clingy and her and Angelo’s relationship is a bit odd. They bicker like an old married couple rather than argue like parent and child. It’s a bit uncomfortable to start with but you soon get used to it and learn why they’re like that. That being said, their weird relationship does lead to a lot of funny moments.

When Jackie follows Angelo across the country she ends up employing Ramon (David Zayas) as her driver and he really doesn’t understand her for a lot of the film, and she meets Ian (Luke Wilson) who attempts to teach her to surf. The scenes with the three of them are often the funniest, especially anytime the trio runs into Angelo.

All the characters in Ride feel real, especially Jackie and Angelo. I feel the screenplay and the performances are what really stands out. You find yourself invested in this mother and son’s relationship, and anyone who has had a clingy parent (or has found themselves being one) will see themselves to some extent in this film.

Ride is a small film but it has a big heart. That’s mostly down to the performances from the cast, Hunt especially is incredible and the scenes she shares with Thwaites are always captivating – whether that’s because they’re funny or surprisingly sweet and heartfelt. 4/5.

Mortal Bek (Brenton Thwaites) teams up with the god Horus (Nikolaj Coster-Waldau) to try and defeat Set (Gerard Butler), the god of darkness who has taken Egypt’s throne, enslaved its people and plunged the empire into chaos and war.

Gods of Egypt is not a good film. There’s so much wrong with it, the dialogue is awkward and sometimes cheesy, the action scenes are terrible and while it might have a lot of big, shiny things, the CGI can’t really save the film.

Let’s talk about the dialogue. From the first scene with Bek and his girlfriend Zaya (Courtney Eaton) their whole conversation is clunky and is a full-on info dump. From there it doesn’t get much better. There’s some quips when I think were supposed to be humours but not as funny as I found them – they were so cheesy and said at a really inappropriate time.

Then there’s the fight scenes. Some aren’t so bad, and the special effects on the Egyptian gods sometimes looks pretty cool, but then others are just awful. There’s the slow-mo pans around a character as he leaps towards someone, it honestly looks like the actor has been told to hold a couple of fighting poses and the camera, editing and VFX teams will do the rest.

I can’t not mention that a film set in Egypt, about Egyptian gods, has very few people of colour in it – especially black people. I feel like the scene where there’s a hundred Thoth’s (Chadwick Boseman) walking around is some sort of weird attempt to level the playing field.

All in all, Gods of Egypt is a dull and predictable film, though it does manage to sometimes looks pretty and sparkly. 1/5.