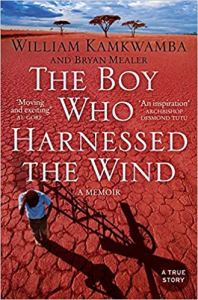 William Kamkwamba loved school but when he was just 14 years old, he could no longer attend because his family couldn’t afford the fees. William resorted to borrowing books from the small local library to continue his education. It was there that he discovered a book with a turbine on the front cover, and with the help of that book William began to build a windmill outside his home to get electricity in his home.

I learnt so much about Malawi and its history from The Boy Who Harnessed the Wind. While I know there has been, and still is, drought and famine in various countries in Africa I’d never learnt about what happened in Malawi between 2001 and 2002. During those years, floods and then droughts caused an emergency in the country as everyone run out of food. The way the book is written gives you the factual information, like the causes of floods and drought and the different diseases that can plague the country, while also making the stark reality of the situations more affecting because of how they all relate to William and his family. William is the only son in his family, and he has six sisters so that’s a lot of mouths to feed and William never shies away from the dire situation they were all in when they were slowly running out of food. There are vivid descriptions of people losing an extreme amount of weight due to starvation and descriptions of people dying in the street. It’s shocking but never exploitative.

The book provides a lot of context about Malawi, its history, superstitions and the difficulties its people faces. The Boy Who Harnessed the Wind follows William’s life as he grows up and gains fame at 19 years old for making a windmill that produces electricity for his family’s home. There is more of a focus on William growing up and the last third with him gaining fame and recognition for what he achieved unfortunately seemed a bit rushed. I did like how it was clear from a very young age that William was interested in finding out how things worked. He would take a part radios and ask people how cars engines would make cars move and was generally curious about everything.

William is an impressive young man. He never gives up and believes in what he was doing when it comes to collecting scraps to make a windmill. People in his village, and even some members of his family, think he’s crazy rummaging around in the scrapyard and saying he’s going to give his home electricity. The doubts people have about him never dents his determination or conviction, and its very satisfying when he’s able to prove people wrong.

The Boy Who Harnessed the Wind is informative and inspiring. William Kamkwamba is a smart man who perseveres even when other people think he’s mad or is using dark magic. Hearing about how he made a windmill to provide electricity for his family, and how he also went on to build other solar or wind-powered devices to improve the lives of his family and the other people in his village was heartening. He’s an inventor and this autobiography captures his inquiring mind and his desire to make life better for his family and his village wonderfully. 4/5.