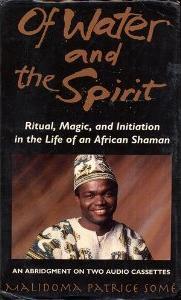 Audiobook narrated by the author.

Malidoma Patrice Somé was born in a Dagara Village but when he was four years old he was kidnapped and taken to a Jesuit school where he remained for the next fifteen years. There he was indoctrinated into European ways of thought and worship and learnt to read and write. When he made his escape and returned to his village, he had to go through a hard initiation to be able to belong with his community and learn their ways and beliefs.

I found Of Water and the Spirit to be an interesting and thought-provoking take on the interaction and conflict between spirituality and academia. Somé is a man who has multiple degrees, undergraduate and postgraduate, so is a very knowledgeable man in that respect, but he also has a great spiritual belief. To me, as someone who is an atheist, it is impressive yet feels contradictory that an educated person can believe so whole-heartedly in the powers of a talisman or a medicine bag.

Somé has important things to say about culture, unity and learning from the mistakes of your ancestors. His discussion of ancestors is interesting as it seems like the Dagara people are very in tune with their past and their ancestors so they can learn and evolve, whereas in the West we often easily forget about the past and ignore any past wrongdoings. According to Somé this is why the West isn’t tolerant of those who are from different cultures and faiths, and it’s not until people look to their past and own up to past atrocities that they can move forward.

Of Water and the Spirit has some stunning imagery as Somé describes what he saw and felt as he went through the initiation. It’s magical and beautiful yet unsettling as boys get burnt or die during the initiation, but Somé also sees some beautiful things.

Considering Of Water and the Spirit was published in the mid-90s it’s disappointing that many of Somé’s observations on tolerance, understanding and belonging are still just as relevant twenty years later. Somé is a man of two worlds and he never fully feels like he fits in either of them, the “educated” West and his spiritual village, but what he does feel is a sense of purpose and a belief that it was his destiny to gain so much knowledge and use that to spread his beliefs and try to make people more understanding.

Of Water and the Spirit can feel a bit preachy at times, but it’s difficult to dislike the memoir because it is what he went through and believes he experienced. We are all different and believe in different things and it was interesting to learn about the culture and beliefs of the Dagara people.