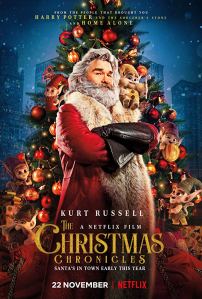 When Kate (Darby Camp) and her older brother Teddy (Judah Lewis) accidentally stowaway on Santa Claus’s (Kurt Russell) sleigh, they have the most unexpected adventure as they must help Santa find his reindeer and deliver the presents before the sun rises on Christmas Day.

The story of Santa is so well known that half the fun with Christmas films is to see how different filmmakers present the world of the North Pole, the elves and everything else Christmassy. In The Christmas Chronicles the elves are super cute CGI creations that are just as lethal as they are helpful. How the sleigh works, how Santa’s sack holds all the presents and how Santa gets down the chimneys are all shown off in some fun and innovative sequences.

The Christmas Chronicles is a lot of fun. While the mythology of Santa is played around with the general plot is rather predictable yet comforting. It’s also funny too and that’s down to Russell’s comedic timing and how adults who no longer believe in Santa, react to him. Kurt Russell makes a great Santa is not something I’d expect to say but it’s true. This Santa is fun, inventive and mischievous but never loses sight of how important his job is to get presents to all the children in the world. That being said, he does stop to do a musical number which is odd yet very entertaining.

The relationship between siblings Kate and Teddy are typical for the Christmas film genre; they fight, Teddy doesn’t really believe in Santa, and they don’t work that well together – at least to begin with. Naturally as they go on their adventure with Santa you learn more about the two of them and why teenager Teddy has been acting out so much. The two young actors do a fine job and by the end you are quite touched by their relationship and how they learn to work together over the course of the night.

The Christmas Chronicles is surprisingly delightful and a fun festive film that’ll entertain both children and adults. 4/5.