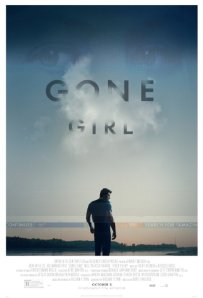 Nick Dunne (Ben Affleck) is (sort of) happily married to Amy (Rosamund Pike) but then on their five year anniversary he comes home to find the house trashed and Amy gone. Soon he along with family and the police are trying to find out what has happened to Amy, however it’s not long before the media’s suspicion falls onto Nick – as it is always the husband that kills the wife.

Gone Girl is directed by David Fincher and its screenplay is by Gillian Flynn, the author of the source novel. It is a very faithful adaptation and fans of the novel will be happy as the rumours of the ending of the film being different to the book are not true – or at least I didn’t notice a difference and I only read the book a few months ago. Flynn has successfully slimmed down her chunky novel to two and a half hours, cutting out scenes and characters that aren’t vital. However that two and a half hours run time can still feel a bit long and some parts do drag a bit.

The film is told in two perspectives. Nick’s perspective is in the present during the police investigation and media hoopla surrounding Amy’s disappearance, while Amy’s is in the past when she and Nick first met, leading up to the months before her disappearance. The jumps between the two perspectives are a bit jarring to start with but you soon get used to it and seeing how Nick and Amy’s relationship progresses adds to the tension and the suspicion of the present day investigation.