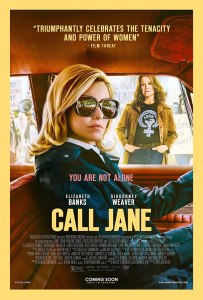 Chicago, 1968. Joy (Elizabeth Banks), a housewife, is expecting her second child but when she learns that continuing her pregnancy could kill her in a time when abortions are illegal in America, she finds help in an unlikely place and goes on to work with the group of suburban women who helped her.

Call Jane does a great job at tackling a tough topic with both sensitivity and humour though never makes light of the dangers these women are in. Both the group known as Jane themselves as they organise illegal abortions, and the women who are having the abortions could face jail, and then potentially lose their jobs or families because of their actions.

The humour and candour in Call Jane works because the situation of women having to illegally procure abortions aka basic healthcare, is the kind of situation where if you don’t laugh, you’ll cry. Listening to male doctors talk about Joy as if she’s not in the room and not of value because the unborn child is seen as more important is laughable and frustrating.

Personally, I tend to think of Elizabeth Banks as a comedic actor so to see her as a lead in a more dramatic role was really different and she did a great job and is the heart of this story. Joy is an interesting character as she has her own biases that she’s never really considered before as she does have a more privileged background compared to some of the other women who come looking for abortions. It’s great to see how her attitude changes over time and how she almost gets a new lease of life as she does something meaningful and becomes more than a housewife and a mother – not that there’s anything wrong with either of those things.

Sigourney Weaver and Wunmi Mosaku play two of the prominent women in this underground abortion group that Joy meets. Weaver is especially brilliant and has pretty much all of the best lines and while the socio-economic factors of who has to get illegal abortions is mostly glossed over, Mosaku’s Gwen is an important Black voice in a group of well-meaning but white women.

The ending of Call Jane is quite abrupt and almost rushed which is a shame as the rest of the film was pretty well-paced and has an engaging script that does well to avoid some fo the clichés. It’s as if they didn’t quite know how to wrap things up or end this story without having a time jump. That being said, overall Call Jane is an enjoyable and unfortunately a timely film. If women could do this in the 1960s, what can they do today in order to have the freedom to chose what should happen to their bodies? 4/5.

As a sidenote, I highly recommend the documentary The Janes which goes more into depth about this group of women and the near misses they had with both the cops and the mob. 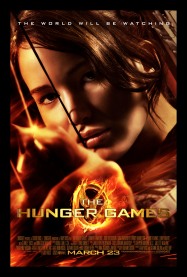 After revisiting the books for the first time in about a decade it was time to revisit the films – many of which I probably haven’t seen since they were first released.

Every year in the ruins of what was once North America, the nation of Panem forces each of its twelve districts to send a teenage boy and girl to compete in the Hunger Games – a fight to the death on live TV until only one victor remains standing. When her younger sister Prim (Willow Shields) is chosen, Katniss Everdeen (Jennifer Lawrence) volunteers to take her place. Katniss is forced to rely upon her sharp instincts as well as the mentorship of drunken former victor Haymitch (Woody Harrelson) as she and her male counterpart, Peeta (Josh Hutcherson), are pitted against bigger, stronger representatives, some of whom have trained for this their whole lives.

From the outset it’s clear the difference between the Capitol and the Districts aka the haves and the have-nots. The Hunger Games opens with two men with brightly coloured hair and vibrant clothes talking about the Games and then cuts to District 12 where a woman screams and everything is bleak and grey.

Even before we get into the arena, the camera work is shaky and frantic. While it works in the arena, encompassing the fear and the adrenalin as the tributes fight to survive and quickly moving away from children’s bloody bodies allowing the imagination to fill in the gaps, in Katniss’s day to day life it feels jarring. I’m not one to feel queasy due to shaky cam, especially not when watching a film on my laptop, but some of the sequences in District 12 did make me feel funny and my eyes hurt due to the camera work.

Some of the most interesting moments in The Hunger Games comes from things we’d never have seen in the book as it was all from Katniss’s point of view. In the film, you get to see the Gamemakers, the people pulling the strings behind the scenes on their holographic screens as they set traps for the young competitors. Again, it goes to show that for people in the Capitol this is just entertainment or just a job but for the tributes it’s the worst time of their life.

I feel like there will be more to comment on performance-wise as the films progress but the likes of Stanley Tucci, Elizabeth Banks, and Toby Jones looking like their having a whale of a time. They all play citizens of the Capitol and are used to lives of luxury but Banks manages to ensure that Effie comes across as well-meaning if a bit insensitive as she’s never not on Katniss and Peeta’s side.

Jennifer Lawrence is really does a fantastic job at Katniss. She’s not the most expressive or potentially even likeable character as she’s had to have so much responsibility from a young age but Lawrence makes it work, showing the girl behind Katniss’s stoicism and the moments when she truly lets her emotions out, often when she’s with her sister or Rue (Amandla Stenberg), you truly feel what she’s going through.

Overall, The Hunger Games is a solid, though sometimes a little slow, adaptation and with stellar performances bringing to life such interesting characters it sets the franchise off on a good foot. 4/5. 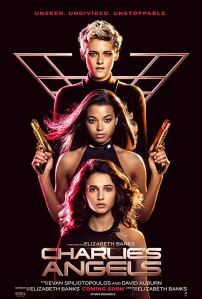 When systems engineer Elena (Naomi Scott) blows the whistle on her employer misusing a dangerous technology, Charlie’s Angels Sabina (Kristen Stewart) and Jane (Ella Balinska) are called into action to save Elena and to stop the technology from getting into the wrong hands.

It seems that Charlie’s Angels has been predominately slated before it was even released here in the UK and, after seeing it, it definitely doesn’t deserve all the hate. That being said, while Charlie’s Angels is more entertaining than you might’ve heard, it’s not without its problems.

For almost every fast-paced and exciting action sequence, there’s one that is just a little dull. The same can be said for the comedy, some one-liners really work, while others really don’t. But, it’s the cast, who all look like they’re having a lot of fun, that make this film.

Kristen Stewart gets the chance to show off her comedic chops and steals just about every scene she’s in as the sarcastic and motormouth Sabina. Naomi Scott does well as the fish out of water Elena while still almost seamlessly finding a place amongst the super spies, while Ella Balinska gives a star-making turn as the serious Jane. All three of them have their “hero moments” and they are all really satisfying.

The supporting cast are all good too. The title of Bosley is now what all the Angels’ handlers are known as and Djimon Hounsou, Patrick Stewart and Elizabeth Banks all put their own spin on what a mentor-type character should be like. Sam Claflin plays Elena’s power-hungry boss and while he’s no in the film a lot, his scenes when he’s scared for his life are hilarious thanks to the expressions on his face.

The third and final act of Charlie’s Angels is when the film really comes into its own. Once the trio of heroines are more of a cohesive unit and all the motives and bad guys have been revealed, that’s when everything comes together. This is when you truly see what a Charlie’s Angels film with these three characters could be like and it’s so fun and entertaining that you wish the film had found its groove sooner. Seeing Elena, Sabina and Jane be proper action/spy heroines makes me hope that this film somehow gets a sequel because now this trio is a solid team, I want to see them save the world again.

Charlie’s Angels is fun. The humour doesn’t always land but the charm of the three leads pulls it through. The final thing I have to quickly mention is the costuming in Charlie’s Angels as it is brilliant. It’s so nice to see female characters in outfits that are practical but look good and show off each character’s personality. 3/5.