August is known as Women in Translation month, so I thought it would be the perfect time to share some recommendations. Thanks to my Read the World Project I’ve read more translated works these past few years than I ever would have if I hadn’t decided to try and read a book from every country in the world.

Here’s ten books from women in translation that I enjoyed and I’ve noted the country where the author is from.

Safe as Houses by Simone van der Vlugt, translated by Michele Hutchison (Netherlands)
I listened to this audio and it was really good. It’s a proper suspenseful crime/thriller where a woman and her young child are held hostage in their own home by an escaped criminal.

Crimson by Nivaq Korneliussen, translated by Anna Halager (Greenland)
No one in this book is straight. It’s a really short coming of age story about a group of people who are all in their late teens/early twenties who are all connected in some way, they might be friends, siblings, roommates and it’s them just living their lives and figuring out who they are.

The Naked Woman by Armonía Somers, translated by Kit Maude (Uruguary)
This is the sort of book I’d love to discuss with other people. It’s a really interesting feminist story about a “crazy” woman who is really just liberated.

The Eighth Life by Nino Haratischvili, translated by Charlotte Collins and Ruth Martin (Georgia)
This chonky book is over 900 pages and follows a family for generations. It’s a real deep dive into the history of Georgia and the Soviet Union, and a lot of these characters have truly horrible things happen to them.

In the Distance with You by Carla Guelfenbein, translated by John Cullen (Chile)
This book was beautifully written (which I think is a sign of a great translation) and it’s kind of a love letter to authors, their stories and the impact they can have on people.

Thirty Days by Annelies Verbeke, translated by Liz Waters (Belgium)
Spanning thirty days of a painter and decorators life, it is about how his life entwines with the people he works for and how things change when he meets and helps a group of Afghans and Syrians at a makeshift refugee camp.

Fear and His Servant by Mirjana Novaković, translated by Terence McEneny (Serbia)
I didn’t love this book, but I found the combination of eighteenth-century Serbia, vampires and what could be the Devil really interesting. There’s also a wry sense humour throughout the book which I really liked.

Burning Cities by Kai Aareleid, translated by Adam Cullen (Estonia)
Set in Estonia between 1941-1990s, the thing I really remember about Burning Cities is how the city it’s set in is a character itself and how the city is struggling or thriving helps show how life could be like for people during and after the conflict they experienced.

The Door by Magda Szabó, translated by Len Rix (Hungary)
The Door is about the relationship between an author and her housekeeper and it’s a relationship that’s sometimes fraught and at other times is caring.

Have you read any of these books? What are some of your favourite books from women in translation? There’s a Women in Translation Readathon happening 24 – 31 August hosted by Matthew Sciarappa, Kendra Winchester and Insert Literary Pun Here on YouTube, if you want to dedicate some time to women in translation. 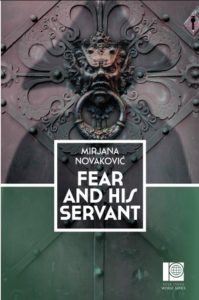 Serbia in the eighteenth century is a battleground of empires, with the Ottomans on one side and the Habsburgs on the other. When Count Otto von Hausburg arrives in Belgrade with his trusted servant Novak, they learn of tales of vampires and missing men. In the besieged capital, safe for now behind the fortress walls, Princess Maria Augusta waits for love to save her troubled soul. But who is the strange, charismatic count, and can we trust the story he is telling us? While some call him the Devil, he appears to have all the fears and pettiness of an ordinary man.

It took me over a month to read Fear and His Servant. Not because I didn’t like it, when I was reading it I did enjoy it, but so much was happening in my life that even when I did have free time to read I didn’t have the right mental headspace to actually sit down and read that often. I think some of the issues I had with Fear and His Servant are down to how long it took me to read it. For instance, I’d get confused by who was who and how they were connected because it’d been so long since I’d picked it up that I’d forgotten characters names. Also, the language used and the writing style is very reminiscent of eighteenth century writing even though the book was written in the twenty-first century. It can take a while to get used to it, but it also helps bring you into the story as it makes the setting and the characters feel more alive.

Fear and His Servant is from both von Hausburg’s and Maria Augusta’s point of view, but it isn’t always that clear when it switches between them. Slowly I started to pick up which character was narrating the story as they each have a unique voice. Von Hausburg is sarcastic and blunt and he has a sort of charm about him, even though he is the Devil. It took me an embarrassingly long time to realise the blurb stating “The Devil and Princess Maria Augusta of Thurn and Taxis tell unreliable tales of vampires and political intrigue in eighteenth-century Serbia” isn’t a metaphor and the Devil is actually a main character. It’s quite a fun experience reading a story from the point of view of the Devil, especially as he’s not as fearless or all-powerful as one might think, and every now and then there’s flashbacks to Biblical times as he tells stories of Jesus, Judas and Mary Magdalene.

Princess Maria’s side of the story is like she’s recounting the events to an unnamed person who prompts her every now and then, but you only have Maria’s responses. She seems to go off on a tangent more often than not and sometimes mentions things that have not yet happened in the main story.

As the story progresses and von Hausburg and Princess Maria journey with a group of men to find the truth about the vampires, their stories start to diverge. You read about events from each of their perspectives and sometimes they’re slightly different and in others they are vastly different. It’s hard to tell what’s real and what’s not, as not only to their accounts differ from each other’s, but at times they contradict themselves. It makes the story both intriguing and confusing.

Fear and His Servant is an interesting story with compelling points of view. It’s sometimes funny, is sometimes eerie, and it’s also sometimes confusing. It’s an interesting premise and it’s certainly a book like nothing I’ve read in recent years, but I think having such large gaps between when I’d pick it up, had a detrimental effect on the overall reading experience.